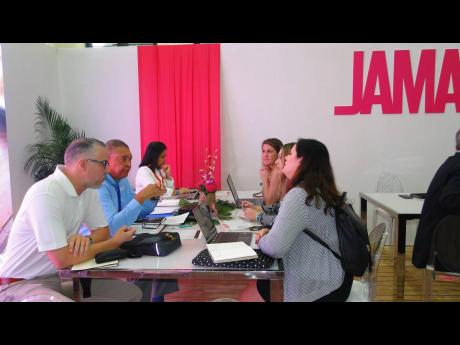 File
People doing business in a section of the Jamaica Tourist Board’s space at Caribbean Travel Marketplace at the Montego Bay Conference Centre in 2019.

The Caribbean is set to return to face-to-face tourism trade shows with the staging of the region’s travel marketplace planned for spring 2021.

Since COVID-19 changed the face of the tourism sector, cancelling all international, regional and national trade shows, the industry has been forced to go virtual, including next month’s Jamaica Exchange (JAPEX).

However, Caribbean Travel Marketplace (CTM), staged by the Caribbean Hotel and Tourism Association (CHTA) annually during January, has not only been postponed to late April-early May 2021, but, “Resoundingly, the collective feedback indicates a desire for us to be together in person, rather than virtual”, Karen Whitt, chairman of the CTM, said.

“Caribbean Travel Marketplace intends to deliver the same benefits, values and principles for which we have become known with the qualities that embody the charm of the region,” Whitt added.

According to her, from all indications, the new dates will allow travel partners and CHTA members the flexibility with travel plans, and hopefully more clarity on the effects and future of the pandemic.

She said the marketplace planning committee canvassed travel partners, members, destination representatives, CHTA officers and others for feedback on the best approach for producing the first Caribbean Travel Marketplace since the beginning of the pandemic.

The event attracts buyers, tour operators and media from all parts of the world, who negotiate rates with supplier companies such as hotels, attractions, destination management companies and tourism boards.

With Jamaica’s recovery predicated on tourism’s recovery from a baseline for the April to June 2020 quarter, where the country saw a 98 per cent downturn in expenditure and visitor arrivals, the island’s stakeholders welcome the return of the event.

President of the Jamaica Hotel and Tourist Association (JHTA), Clifton Reader, said if the CHTA is considering face-to-face trade shows, it depicts confidence in the region, and can only help to build exposure of the Jamaican product after almost of a year of limited access to tour operators and travel agents who are critical to the market.

He said it could also be an indication that travel is back.

In the meantime, Whitt is hoping that the CHTA will in short order be able to announce a destination which she said will rise to the occasion of playing host to the 39th anniversary event.

Last year, the show was hosted by Jamaica.

“We considered many options and have come to the conclusion that the only way to truly showcase the uniqueness of our people, history, culture, food, music and magic of the Caribbean is to actually be together in the Caribbean,” she noted.