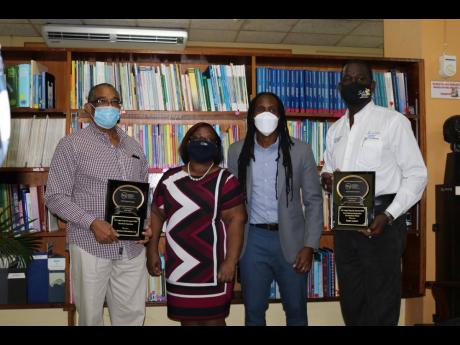 The National Library of Jamaica (NLJ) recently celebrated its 16th anniversary of the Legal Deposit Act of Jamaica.

The family fun-filled virtual launch was dubbed ‘Sweet Sixteen’ and recognised the contribution of the top author, top collector/depositor of Jamaican music, film-maker, and publisher who have been donating to the NLJ since the act was passed in 2004.

The awardees were: Top Collector/Depositor for Jamaican Music, Teddy Laidley; The Author With Most Deposits Over 16 Years, Valerie Brown; Top Depositor in Film, Rohan Kanhai Condison (Jollywood Studios); and Top Depositor in Book, Ian Randle Publishers. Owen ‘Blackka’ Ellis chaired the event, with his usual jokes interspersed throughout the event.

Minister Olivia Grange launched the event stating that, “In our culture, we pass on knowledge through the stories that we tell from one generation to the next, and by so doing we preserve our heritage. This is precisely what Legal Deposit is all about, it’s about preserving our stories and our heritage for future generations, whether we put them on paper, vinyl, CDs, tape, film or any other medium. Whatever we publish is part of our heritage and we must safeguard it in the national collection at the National Library.” Alando Terrelonge, state minister in the Ministry of Culture, Gender, Entertainment and Sport, also added, “Within the age of technology is the understanding that we must have a streamlined and documented approach to documenting and curating the national treasures produced by our creatives. So from films, books and music, whatever it is, every October we recognise the work of those creative who help to preserve our Jamaican culture, who help to preserve our creative talents, and this is why we celebrate the Legal Deposit Month, where we recognise the importance of having a place where we can regulate and preserve these treasures for all humanity, for all Jamaicans and, of course, for generations to come.”

Monique Forgie-Scott, manager of the Collection Development Branch of the NLJ, shared that the library is dedicated to educating Jamaican producers and publishers of creative work, and this is why the legal deposit is so important to the posterity of the nation’s culture.