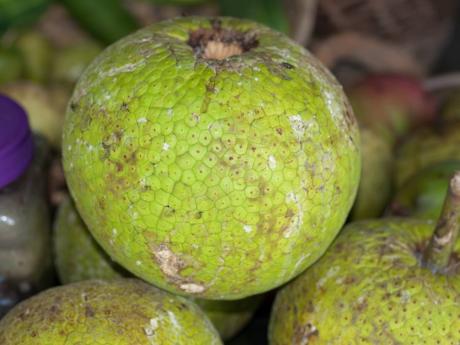 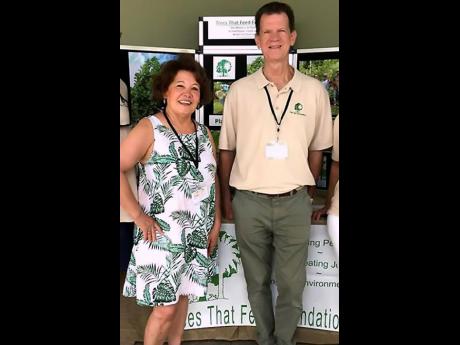 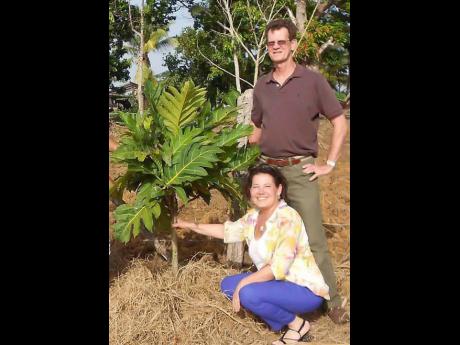 Lynda Edwards and George Graham, two Jamaica-born writers a generation apart, interview interesting Jamaicans living abroad. George was born in 1934 in Black River. Lynda was born in 1967 in Mandeville. Both live in Florida. This week, they interview Mary McLaughlin, who with her late brother Paul and her husband Michael, founded the Trees That Feed Foundation. The foundation is dedicated to planting fruit trees in Jamaica and other countries.

Mary McLaughlin (nee Virtue) was born in Jamaica in 1950 and went to school at St Andrews High School for Girls. She went on to study geology at the University of the West Indies and, after graduating, worked with the Jamaican Geological Survey. Emigrating to the USA in 1978, she worked for oil companies in Dallas, Texas, then moved with her husband to the Chicago area. She is also a professional artist. Her enamel and bone-china creations have ended up in the White House. In 2008, she founded Trees That Feed Foundation, whose mission is planting fruit trees in developing countries to feed people, create jobs and benefit the environment.

GEORGE: The Trees That Feed Foundation donates various kinds of fruit trees, including breadfruit, mango, avocado and cashew, but you seem to concentrate on breadfruit. What is it about the breadfruit that impresses you?

MARY: Many fruit are good to eat, for example, the mango or the guava. But people can’t live on sweet and sugary fruit. Breadfruit is part of a balanced diet. It provides bulk and calories as well as many nutrients … vitamin C, potassium, riboflavin and more. Think of a roasted breadfruit like a baked potato … its own mild flavour, but delicious when seasoned and filling, with a medium glycemic index. Growing up in Jamaica, I’ve loved breadfruit from childhood to this day and I want to share it with the world.

LYNDA: You don’t just provide trees for schools, churches and individuals to plant, you also provide equipment for entrepreneurs to dry the breadfruit and grind it into flour. How does that work and how is that part of your foundation doing?

MARY: Our intent is to help people in Jamaica and elsewhere to become self-sufficient in terms of food and nutrition. We don’t aim for subsistence farming only. Rather, we want to see farms and other small businesses appear. We don’t want people to become dependent on us, rather, we want to see successful entrepreneurs across the market chain. So, we encourage farming, but we also encourage small businesses such as breadfruit processing and preservation.

We give away equipment such as food dehydrators and grinding mills, to get businesses started. We have seen several successful entrepreneurs making breadfruit flour.

GEORGE: During World War II when I lived in Malvern, St Elizabeth, we couldn’t import flour because the island was surrounded by Hitler’s U-Boats. I remember eating bun made from mango seed flour. Is that another way your foundation could go?

MARY: As we have learned, almost any fruit can be dried and turned into flour. And that’s a good idea, because tropical fruit are seasonal. Either you have too much or none at all, with very little in between. So, we encourage preserving excess fruit in times of abundance, then you’ll be able to enjoy breadfruit, or mango, or other fruit out of season. The equipment we recommend can be used to process breadfruit, mango, papaya, plums, you name it, even meat and fish.

LYNDA: S ince its beginning in 2008, your foundation’s work has spread from Jamaica to several other Caribbean islands, and even to Africa. What’s your eventual goal?

MARY: We’re now in 18 countries. It’s been opportunistic rather than a specific goal. We go where we can make a difference, where we can afford it, and where we have a local partner who we can trust and can work with easily. One of the most satisfying things about our work is that we’ve found so many honest, good people who want to work with us to help those less fortunate.

GEORGE: How many trees have you planted in Jamaica? How many worldwide?

MARY: The number is always going up! As of last month-end, we’ve funded over 120,000 fruit trees in Jamaica, over 210,000 worldwide. We’ve committed to thousands more by the end of the year. We do have a number goal for tree planting … we’re aiming at 1,000,000. That’s a big number, because fruit trees tend to be more expensive than timber trees.

LYNDA: Where could we see some of your trees if we were driving around Jamaica?

MARY: Most of our trees have gone to farmers, many of whom are off the beaten track. But, for breadfruit sightseeing, it’s hard to beat the CASE orchard in Portland, when you’re heading eastward toward Port Antonio. They’ve done a nice job caring for and studying breadfruit. If you want to purchase breadfruit in bulk, we’ve mapped hundreds of breadfruit farms. You can see a detailed map on our website ( www.treesthatfeed.org).

GEORGE: Your husband Michael wanted to be a nuclear scientist but ended up as an actuarial accountant. I understand he hasn’t lost his interest in science. Was it he who invented the solar machine that makes flour from the breadfruits?

MARY: Mike likes to joke; he couldn’t decide between rocket science and brain surgery! But yes, he was a physics major and that was a direct benefit in designing our hybrid solar dryer.

He did the maths and found out how many pounds of breadfruit could be dried by how many cubic feet of air at what temperature. Actually, he built a full-size prototype here in Chicago, to prove the concept. Our neighbours were fascinated by the huge contraption in our driveway!

LYNDA: Your husband is also Jamaica-born. You met while you were both attending The University of the West Indies. When did you get married?

MARY: We are both Jamaicans. Our story is so romantic. I was in high school and Mike was at UWI. We met once briefly, then again at a New Year’s Eve party. We both dumped our dates and danced together all night. We got married in 1972 at the University Chapel. Years later, we discovered that there was an exotic breadfruit tree planted right behind the chapel. So … maybe it was our destiny to plant more breadfruit trees!

GEORGE: Any children? Grandchildren? Where do they live?

MARY: We have two beautiful grown daughters and they’ve given us five incredibly wonderful little grandchildren. God has blessed us, because they live just a few minutes away from us in the Chicago suburbs. Our family is our wealth and our joy.

GEORGE: Is there anything else you would like to tell Jamaicans, not only in Jamaica, but also in America and in the rest of the global diaspora?

MARY: You know … when you hear the news of the day, it’s easy to think about crime and disease and all kinds of problems in the world. Through our work, we have discovered that there are good people, wonderful people. Most people are good at heart, willing and trying to help those less fortunate. I’ve always been an optimistic person, and I’ve gotten more so. I would encourage everyone to think of the good that each of us can accomplish by being positive in attitude. And try to help the environment!