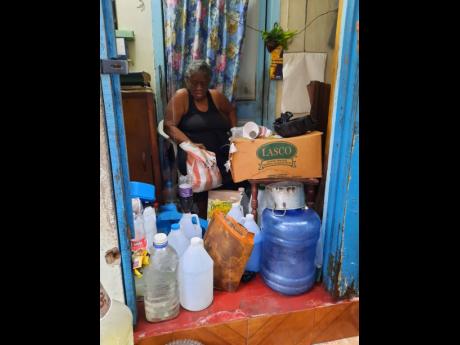 Corey Robinson
Rowe Elizabeth speaks with laboured breath about the discomfort caused by the rains last week, as she tries desperately to secure her belongings in her flooded South St Andrew home. 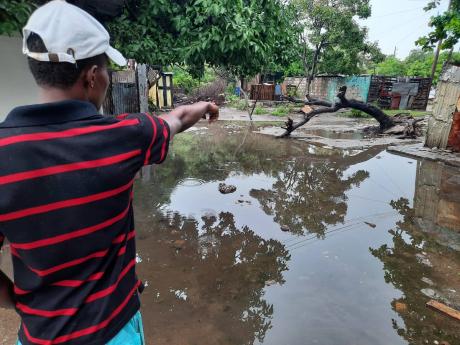 While Mark Golding and his campaign director, Dr Angela Brown Burke, were busy ramping up delegate support for the upcoming People’s National Party (PNP) presidential election last week, their constituents – some old and destitute – were occupied sweeping rainwater from their homes, hoping the skies and the discomfort to their lives would soon cease.

Eighty-plus-year-old Rowe Elizabeth was among those hardest hit in Golding’s St Andrew South Constituency where several old houses – already leaning from dilapidation – buckled under the weight of showers thrashing their roofs and pitter-pattering on floor and furniture.

Sitting on her muddy verandah on Love Street last week, Elizabeth, who lives alone, tried desperately to protect herself, documents, and a few knick-knacks she sells to make a living, from the beating rainfall. And while she failed miserably, the elderly woman fretted on bigger problems.

“I want them to come and go get the heart medication for me. I need it. Is only one pill leave and I am going to have to cut it and take half,” frowned Elizabeth, gasping for breath between syllables. “I am waiting for ‘Iggy’ to go for it for me at the clinic, but I don’t hear anything from him from morning. I don’t know what happened.

“I can’t go up and down outside because of the rain, and they are supposed to come and get it for me ...” she told The Sunday Gleaner before a young man burst through her zinc gate with a piece of paper confirming her name and prescription before darting out again.

It wasn’t clear if Elizabeth, who suffered heart, cholesterol and hypertension issues, received her medication later, but for more than half an hour, her struggles to keep herself and her meagre stock of toothbrushes, food seasoning and Q-tips dry, persisted.

“This piece of zinc now I put in the grille behind the window to keep out the breeze and rainfall. But I did have another one and the people dem come into the yard and take it out. So now I am keeping it in here, although the place ‘chuck’ up. Cause I don’t know dem intention,” struggled the elderly woman, already battling the strict COVID-19 containment measures in place.

“Call Golding! If him know that we flood out down here, him going to come. Call him!” shouted one among a group of women, sparking excitement from the others brooming a flooded section of Love Street. They pointed from one house to the next, relaying flooding and leaking-roof stories, but noted: “Right now, is food we want, Mr Gleaner. We hungry.”

Golding, in the September 3 general election, won his constituency by a staggering 86 per cent of voters, many of whom, despite their weather conditions, sang his praises last week as he prepares to contest Lisa Hanna for leadership of the PNP.

“Him (Golding) alright. He just has to be true to the people dem, and hold on to the truth. Otherwise, people will switch on you. Is just so it runs,” offered a faithful Anazelke Hanse, who hung freshly washed clothes on a line on her Penn Street veranda, despite the gloomy weather. Inside, pots and pans caught water from her leaking roof. “I want him to win.”

On Thursday, Golding, during a Gleaner Editors’ Forum, said he has been trying his best to make conditions more bearable for his constituents, but pointed a stiffer finger at the Government’s response.

So, too, did his colleague Brown Burke, who seemed less tolerated by her flooded-out constituents.

“The infrastructure issues, of course, need to be tackled by the State. There is a limited amount that an MP can do in terms of infrastructure which requires substantial investment. But we have seen some amount of improvement in certain sections, in sewage, in the water lines, and in street lights,” said Golding. “We still have some more work to do.”

But with a dearth of houses and bathrooms, COVID-19, constant abuse from the security forces, and the latest threat – a broken-down section of a neighbouring gully flooding wooden houses – residents of ‘Bottom Back-to’ said they have all but given up on the MP – if not the party.

Last week, filthy water from the broken gully transformed houses into brackish swamps, yards into mud lakes, and narrow lanes into gutters. This is separate from the havoc rainfall causes to motorists using lower Hagley Park and Marcus Garvey Drive, when it rains.

“Every time the rain falls, the water comes over high from the gully. See it there, every house around here flood out. The MP knows about it but nothing nuh come out of it. Is a long time this stay so,” fumed one youngster, standing in floodwaters up to his knees inside his wooden shack. “We need them to come and fix the gully now!”

According to Brown Burke, however, “We have issues in terms of street lights, garbage collection, water, roads and so on. For the lights, there is more work to be done. We also have challenges with the Chesterfield Gully and everybody knows about Marcus Garvey Drive. But these are truly beyond what an MP can do. It requires the State to come in for that.”

Brown Burke secured more than 90 per cent of voters in the constituency on September 3.

Until amends are made, however, residents of both constituencies must gather more pots, pans and makeshift sandbags to keep floodwaters from their living quarters. This will not be an easy task as the Meteorological Service of Jamaica reported a broad trough over the island that is expected to continue affecting weather conditions into tomorrow.

“As a result, unstable weather conditions will linger across the island with persistent cloudiness, showers and thunderstorms and occasional gusty winds across most parishes,” warned the agency.