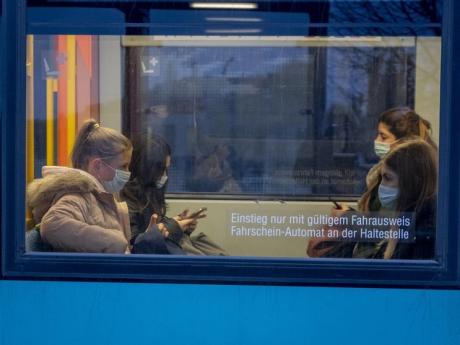 The new restrictions, widely dubbed a “lockdown light,” are set to take effect on Monday and to last until Nov. 30. They were approved during a videoconference meeting between Merkel and Germany’s 16 state governors, who are responsible for imposing and lifting restrictions.

Merkel said she and the governors would review the situation after two weeks and possibly “adapt” some measures. But she was adamant that the restrictions, which she acknowledged are tough, can’t be put off.

“It is completely clear that we must act, and now, to avoid an acute national health emergency,” she told reporters in Berlin.

The national disease control center reported on Wednesday morning the latest in a string of daily records for new confirmed cases — 14,964, taking Germany’s total to 449,275. The country of 83 million people also saw 27 more virus-related deaths, raising its death toll in the pandemic to 10,098.

Merkel said the number of COVID-19 patients in intensive care doubled over the past 10 days.

“We can say that our health system can cope with the challenge today,” Merkel said. “But if the pace of infections continues like this, then we’ll reach the limits of what the health system can manage within weeks.”

Under the restrictions approved Wednesday, theaters, operas, concert halls, cinemas, saunas, gyms, swimming pools and some other sports facilities will be shut for four weeks, along with tattoo, massage and beauty parlors. Brothels and some other businesses also will have to close.

Groups of at most 10 people, from a maximum two households, will be allowed in public.

Merkel called on Germans to refrain from making non-essential journeys, including to see relatives, whether inside or outside the country. She said that hotels will be able to host only people on essential travel, not on tourist trips.

But schools, kindergartens, non-essential shops and hairdressers are to remain open, and church services will still be allowed, unlike during Germany’s shutdown in the first phase of the pandemic in March and April. Restaurants will be able to provide take-out food.

The government plans to spend up to 10 billion euros ($11.8 billion) to compensate companies hit by the shutdown for revenue they miss out on.

Prosperous Germany took less of an economic hit from its spring lockdown, which was milder than those in several other countries, than some of its European peers.

Officials say Germany, which has coped with the outbreak better than many of its neighboring European countries, is beginning to lose control of the situation, with local health authorities unable to trace contacts of those infected and some hospitals refusing to take in new patients.