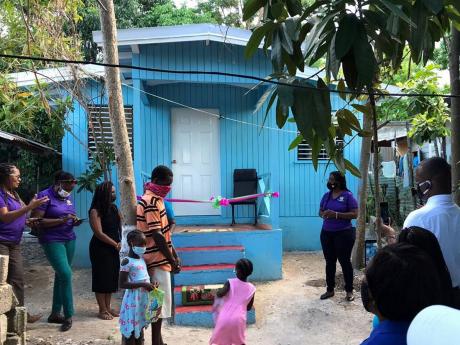 Contributed
Franklyn Bodden and his two daughters, in the company of personnel from the Social Development Commission and the Runaway Bay Community Development Council, stand in front the new house he was gifted. 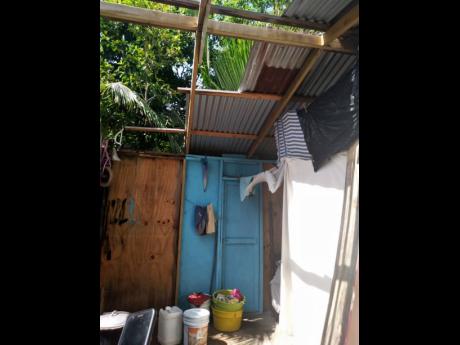 Contributed
A section of the shack that the family occupied.
1
2

Franklyn Bodden could hardly express his feelings when The Gleaner spoke with him. Two weeks ago, he was gifted a two-bedroom house in Runaway Bay, St Ann, thanks to the effort of the Runaway Bay Community Development Council (CDC). Now, he and his two daughters, who are four and five, have somewhere decent to live.

“The way I feel I can hardly express it; I feel so great,” Bodden said. “Ah glad for the effort that all ah di team put een, all ah dem.

“I look like a man right now, yuh nuh. I was a man but, yuh nuh, certain things like that I did need it and through me did have two children it was a struggle fi mi, but right now is a great and big help for me and the children dem. I have somewhere now that is decent, so mi could even invite somebody so we could sit an’ reason.”

The team that Bodden refers to includes the CDC, whose president, Camille Ade John, gave a synopsis of what led to the wonderful moment for Bodden.

“Someone contacted Mrs Hall (Antoinette Ledgister-Hall), who is the Social Development Commission’s officer, and she came to me as the president and we arranged, both of us, to visit him.”

“When we visited him, nothing could have prepared us for what we saw. It wasn’t a house, it was a little shack made up of pieces of wood, leaning against a tree, literally one dark room, and in there were two little girls.”

Upon seeing the condition the family was living in, she couldn’t hold back the tears, she said, and decided there and then that the CDC, which focuses on welfare and education, would make every effort to help Bodden. That was in 2019.

The COVID-19 pandemic slowed down the process, but the effort was maintained. Calling on friends and relatives for their support finally paid dividends.

MS Tech Solutions, an information technology company whose CEO is Mario Sparkes, came on board and sponsored the house and brought in Lottis Project to construct the building.

“Within a short space of time the construction people were down. It was just fantastic; that house was delivered in five weeks. He’s been in it two weeks now.”

Originally intended to be a one-bedroom unit costing around $1.5 million, the final product was a two-bedroom flat with kitchen, bathroom and veranda, costing a bit more. The house is made of board, with a concrete base.

“We’ve just been so overwhelmed with the support. It gave me hope for Jamaica,” Ade John pointed out.

“He’s a changed man, you just see the difference in him. And the children, they now have their own room. The Sparkes (Mario and his wife) donated new beds with linen, a fridge and a stove. It’s just been wonderful!”

Ade John also mentioned a couple of other projects that the CDC has been involved with.

This included a young man that the CDC sent to school for 10 months, paying for uniform, lunch and all travel expenses.

There is also a house in Runaway Bay that needs urgent repairs to the roof, which is their next project.

“A big thank you has to go to friends and relatives of mine in the United Kingdom because they’ve been fantastic. During this corona time, we are able to put zinc on another house because of the funds that they have sent; and we all know that it’s tough for everybody around the world,” Ade John acknowledged.