Hanna’s mind not made up on Bunting, Horne 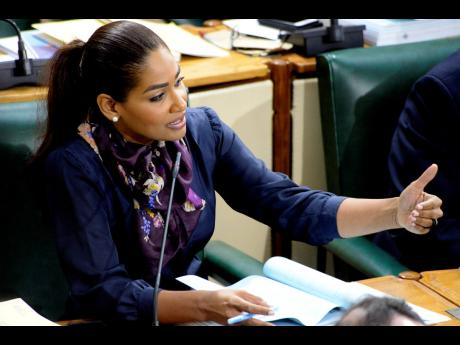 People’s National Party (PNP) leadership candidate Lisa Hanna, while remaining noncommittal about whether she would make Senate appointments available to party stalwarts Peter Bunting and Norman Horne, says that all options remain on the table.

Hanna, who was responding to questions at a virtual Gleaner Editors Forum last month, added that even though she appreciates and respects the position taken by former party treasurer Horne in foregoing a Senate appointment on the grounds that a new leader should be given “a free hand” to pick a team of his or her own choosing, a decision would be made “once we cross that bridge”.

“I have not stated publicly what I would do, as I believe we have to first get over the hurdle of the leadership race,” Hanna noted. “I have not taken a decision as to whether I would ask or want the current slate of senators to resign … I have not made up my mind on that. What I will say though, is that I respect the stance taken by Norman Horne, who I believe would be an excellent choice.”

Horne, a businessman, opted not to be sworn in after being selected by outgoing party leader Dr Peter Phillips as one of the PNP’s eight senators to sit in Parliament’s Upper House.

Opposition Leader Phillips has signalled his intention to demit office when the PNP elects a new president on November 7.

Horne, who was in quarantine at the time of the swearing-in in September, was not sworn in.

“At this juncture, swearing in on Friday, October 16, 2020, as intended would be in great contradiction with my convictions, as I would be resigning from the Senate on November 6, 2020, to allow the new leader of the People’s National Party to appoint senators of his or her choice,” he said in a release.

“I will, therefore, be communicating to the governor general and the leader of the Opposition my desire not to be sworn in at this time, mere weeks from November 6, 2020,” he added.

Hanna, while not saying whether she would consider former leadership aspirant Bunting, who surprisingly lost his Central Manchester seat to the Jamaica Labour Party (JLP)’s Rhoda Crawford in the September 2020 general election, said “we will see what happens when we get there”.

Hanna is in a race with Mark Golding, the St Andrew Southern member of parliament, for the leadership of the PNP following a sweep by the JLP at the last national polls.

Approximately 3,300 delegates of the party will decide the president in the leadership run-off.