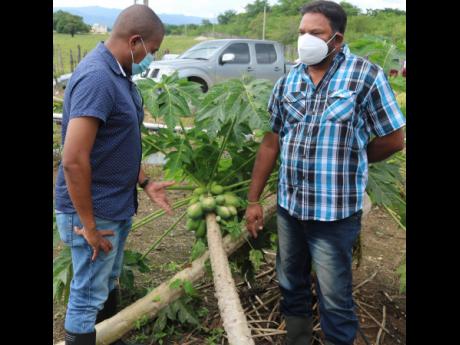 With eight acres of papayas ready for harvesting, St Elizabeth farmer Omar Ramsamugh was all set for a merry Christmas. That was until the elements, it would seem, conspired to wipe out his bumper crop, dealing him a severe financial blow.

Ramsamugh’s farm in Slipe was one of those visited by Agriculture Minister Floyd Green and executives of the Rural Agricultural Development Authority on Saturday for an assessment of the losses to the agricultural sector caused by weeks of extensive rainfall.

With an excellent crop coming on, Ramsamugh was banking on the usual Christmas demand to really pay off since the COVID-19 pandemic occasioned a dramatic fall in sales to his main market – the tourism sector.

When his eight-acre farm with a planting density of 1,000 plants per acre was recently hit by adverse weather, it took down more than half the trees. Those remaining upright were at risk of being lost as the rains continue.

He then contemplated that he could at least salvage some of the fruits still on the tree, but this was not to be. A few days later, he found that most of the fruits, which no longer had shade cover from the leaf canopy, had been sunburnt. Further, the sections of the tree trunks exposed to the sun were also burnt and unable to adequately transport nutrients to the fruits.

Despite the losses, Ramsamugh was trying to keep an optimistic outlook for the Yuletide season, even as a shower or rain cut short the tour of his farm.

“I will try and reap what I can reap because coming into the Christmas season, fruits and vegetables will be scarce, and so I will try to reap as much as I can from it,” he said. “What is down is already down and I will now have to reconsider replanting as soon as possible.”

With the hospitality sector still reeling from the pandemic, many hotels and restaurants are buying much less fruits and vegetables than they did before.

The latest preliminary estates for the agricultural losses due to recent rains, which affected some 12,000 farmers, have been put at $2 billion, revealed Green.

Based on preliminary data, the loss for livestock is estimated at some $30.4 million among 755 farmers.

“There was also the loss from poultry – 414 broilers and layer birds – at an estimated value of $12 million,” according to the minister.