Falmouth to get Bolt’s statue but could lose iconic fountain 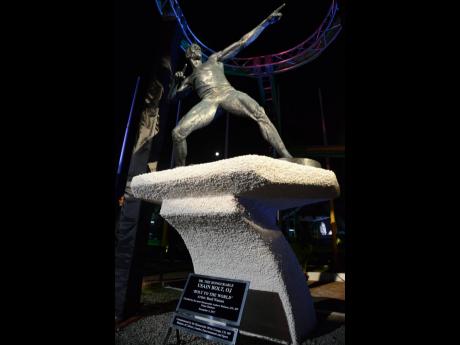 File
The statue of Usain Bolt.

With the uncertainty as to whether a statue of sprint legend Usain Bolt will be erected in Water Square in Falmouth, Trelawny, now over, with Minister of Culture Olivia Babsy Grange giving the project the green light, the future of the square has now emerged as an issue of concern.

Following a recent visit to the square by Grange, Deputy Prime Minister Dr Horace Chang and Falmouth’s Mayor Colin Gager, the culture minister said that Bolt’s stature would definitely be erected in the Georgian town. However, it appears that it will come at the expense of the iconic fountain, which has been a feature of the town since 1805.

“In keeping with a promise that I made to Mayor Colin Gager, a statue of the Honourable Usain Bolt will be erected in Water Square,” said Grange, ending the long-running debate as to whether the statue should be mounted inside the Falmouth Pier, which is off-limits to the general public or in the historic square, which is accessible to all and sundry.

Since the announcement that a statue of Bolt, who was born in Sherwood Content, also in Trelawny, was to be erected in Falmouth, where he attended the William Knibb High School, controversy has been swirling. While officialdom believes it would be an added attraction on the cruise ship pier, the general public, including members of Bolt’s family, say it should be mounted in the town square.

“Since 2009, I have advocated for busts of our three Olympic gold medallists (Bolt, Veronica Campbell-Brown, and Michael Frater) to be mounted in Water Square,” said businessman Dennis Seivwright, a former president of the Trelawny Chamber of Commerce. “I asked then Mayor Garth Wilkinson for permission to seek sponsorship to design and erect the busts. That permission never came, so I am very happy to know that the statue of Usain will be in Water Square.”

However, as it relates to the proposal to move the fountain to facilitate the statue, Seivwright said he is totally opposed to that and wants to see both monuments at the location.

“I will not support any decision to move the fountain,” said Seivwright, “That fountain is a part of our heritage and should stay right where it is.”

In advocating for the removal of the fountain, Chang argued that most fountains were not being properly maintained, and as a consequence, does very little to advance the aesthetics of the places where they are located.

“No fountain in Jamaica is properly maintained. They have, in the main, been receptacles for garbage and bathrooms for people of unsound mind,” said Chang.

According to Grange, the decision as to how the square will be configured going forward will be in the hands of the Jamaica Heritage Trust, which will visit the location and make a final recommendation.