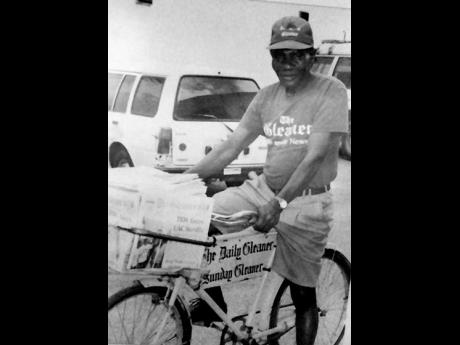 Legendary Newspaper vendor William ‘Jay’ Parkins, who was the face of The Gleaner on the streets of Montego Bay, St James, for over 50 years, died last Thursday after what his family said was a brief bout of illness.

The 89-year-old Parkins, who was originally from Pondside, Hanover, but who made Montego Bay his home for well over 60-years ago, won numerous long- service awards from The Gleaner for his years of service, which was marked by his unwavering commitment to delivering high-quality service with his winning smile.

“Jay was a faithful face of The Gleaner over many years,” said Jenni Campbell, who served for several years as the manager of The Gleaner’s Western Bureau before moving back to Kingston, having been elevated to the position of managing editor.

“Jay was about punctuality, dedication, and commitment to his job. His constant smile was always calming and reassuring,” continued Campbell. “It was always a pleasure to work with him because while he did no talk a lot, his reassuring smile would tell that all is well.”

When news broke in Montego Bay on Thursday that ‘Jay’ had died, kind words flowed from all and sundry as many took time out to reflect on the life of the man many remembered as “the little old man with the yellow bicycle”.

A photograph of Jay has been on display in the foyer of the officer of The Gleaner’s Western Bureau for several years, holding pride of place alongside photographs of track and field superstar Usain Bolt and businessman extraordinaire Anthony ‘Tony’ Hart.

While Jay officially retired as a vendor just over 10 years ago, he still spent most of his time at The Gleaner’s old location on King Street, where he was perfectly at home among the street vendors and business operators.

“Jay was always on the corner with us because he saw the old Gleaner building as his base,” one vendor told The Gleaner. “Because he always has this calm and friendly look, he was always the one people would ask direction when they came on King Street but were not exactly sure of where they were going.”

Since the onset of the COVID-19 pandemic, because of his age, Jay was forced to stay at his Green Pond home, in keeping with the Ministry of Health and Wellness’s health and safety protocol, a scenario that did not fit his lifestyle.

According to relatives, he recently became ill, and with his condition not improving, he was taken to the Cornwall Regional Hospital, where he died on Thursday.

Jay is survived by his daughters – June, Janet, and Vivienne – four grandchildren, and seven great-grandchildren.