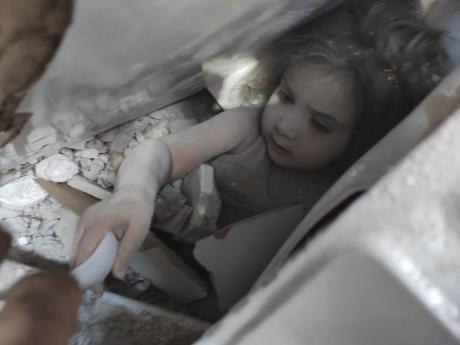 In this photo provided by the Turkish Gendarmerie, Ayda Gezgin is tended to by a member of rescue services in the rubble of her collapsed building, in Izmir, Turkey, Tuesday, Nov. 3, 2020. Rescuers in the Turkish coastal city pulled Gezgin out alive from the rubble, some four days (91 hours) after a strong earthquake hit Turkey and Greece. (Turkish Gendarmerie via AP)

IZMIR, TURKEY (AP) — Rescuers in the Turkish city of Izmir pulled a young girl out alive from the rubble of a collapsed apartment building Tuesday, four days after a strong earthquake hit Turkey and Greece and as hopes of reaching survivors began to fade.

Wrapped in a thermal blanket, the girl was taken into an ambulance on a stretcher to the sounds of applause and chants of “God is great!” from rescue workers and onlookers.

Health Minister Fahrettin Koca identified her as 3-year-old Ayda Gezgin on Twitter. The child had been trapped inside the rubble for 91 hours since Friday’s quake struck in the Aegean Sea and was the 107th person to have been pulled out of collapsed buildings alive.

After she was pulled from the rubble, little Ayda called out for her mother, in video of the rescue broadcast on television.

But Ayda’s mother did not survive. Her body was found amid the wreckage hours later. Her brother and father were not inside the building at the time of the quake.

Rescuer Nusret Aksoy told reporters that he was sifting through the rubble of the toppled eight-floor building when he heard a child’s scream and called for silence. He later located the girl in a tight space next to a dishwasher.

The girl waved at him, told him her name and said that she was okay, Aksoy said.

Health ministry officials said the girl was in good condition but would be kept under observation in the hospital for a while. She asked for for meatballs and a yoghurt drink on her way to the hospital, state-run Anadolu Agency reported.

Her rescue came a day after another 3-year-old girl and a 14-year-old girl were also pulled out alive from collapsed buildings in Izmir, Turkey’s third-largest city.

Meanwhile, the death toll in the earthquake climbed to 112, after emergency crews retrieved more bodies from toppled buildings in the city. Officials said 138 quake survivors were still hospitalized, and three of them were in serious condition.

The U.S. Geological Survey registered the quake’s magnitude at 7.0, though other agencies recorded it as less severe.