#USelection | US 'entitled to know' winner on election day: Trump 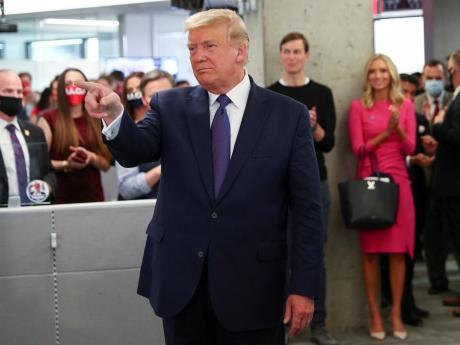 US President Donald Trump on Tuesday again sought to sow doubt over the counting of ballots beyond election day, saying the country was "entitled" to know who won on the day of the vote.

"You have to have a date, and the date happens to be November 3," he said during a visit to Republican National Committee offices in Arlington, Virginia.

"And we should be entitled to know who won on November 3."

Supporters cheered and applauded President Donald Trump at his campaign headquarters, where he visited Tuesday to thank dozens of staffers working to get him reelected.

Trump predicted his victory, but acknowledged he could lose.

“I think we’re going to have a great night, but it’s politics and it’s elections and you never know," Trump said.

He said his campaign was doing well in states like Florida, Arizona and Texas. He noted the importance of winning Pennsylvania.

Trump said success will bring unity. He listed what he believes are his accomplishments with the coronavirus and the economy.

More than 100 staffers, almost all wearing masks, lined up against the back wall of the operations center to hear from their candidate. Some masks were emblazoned with “Trump" and “MAGA" for Trump’s “Make America Great Again" campaign slogan.