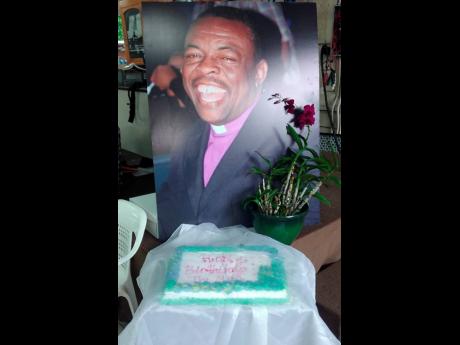 Photo by Jason Cross
A birthday cake and poster of Pastor Bobby Wilmot are laid out at Covenant Christian Church where the late minister was honoured during a special service.

Late Pastor Bobby Lancaster Wilmot has been lauded by close friend and partner in Christian ministry, Richard Cooke, as a man of unrivalled enthusiasm for the gospel who drew many to the Church through his magnetic personality.

He is to be buried on Saturday, November 7 at Dovecot Memorial Park.

Addressing a thanksgiving service at the church on Sunday, which would have been his birthday, Cooke recalled his first meeting with Wilmot many years ago at Covenant Christian Church’s current Half-Way Tree Road location where Wilmot was in charge of around three 10-wheeler tipper trucks.

“Bobby’s love of vehicles, small and large, and of driving and of travel was a lifelong passion. I had the privilege of covering some of those with him,” Cooke said during a special service honouring Wilmot, where a large cake with the words ‘The Man’ was on hand.

Little did Cooke know that their lives would have been “inextricably intertwined in the ministry of the gospel”.

Cooke shared stories of his days travelling and ministering alongside Wilmot, attending numerous churches and conferences in the United States.

As a full-time pastor and evangelist, Cooke said Wilmot was given the task of developing a ministry in the gritty inner city of Trench Town, Kingston, in 1989.

In 1991, both of them established the Joy Town Covenant Community Church and, three years later, the Joy Town Learning Centre, an early childhood school.

Wilmot was married to Jennifer for 37 years. The couple, who knew each other for 44 years, never had children of their own but adopted and fostered a number of children.

The late cleric was a board member of Operation Save Jamaica and pastored in Majesty Gardens in the past. He was also a chairman of Street Pastors Jamaica and served as part of the team for the Prayer Line on Power 106 FM.

Wilmot also worked with a team of pastors from New York, who travelled often to several countries in Africa.