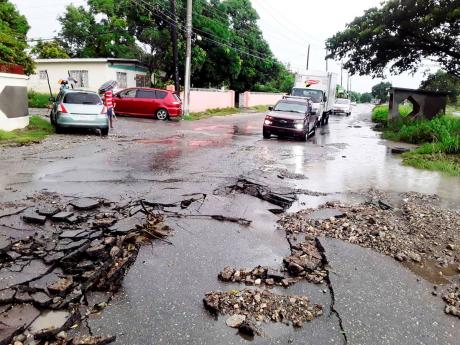 As heavy rains associated with Hurricane Eta continue to wreak havoc in the eastern parish of St Thomas, concerns about life and property are being raised by residents of several affected areas.

The residents are calling on the National Works Agency (NWA) to establish proper drainage in the parish, which they believe will be the answer to the decades-old cry.

Loraine Hardy, who lives with her daughter in Pamphret, shared that she has lost several food items and appliances as floodwaters have invaded her space, reaching knee-high on the first floor of her two-storey house.

Hardy said that the flooding is caused by a culvert that was placed in her backyard without her permission or knowledge.

“It has been going on for over 20 years. The Government ran the culvert in the middle of my land, and whenever the water comes through it, it tears down all the fruit trees, including mango, orange, coconut, ackee, sweetsop, soursop … all the trees in my yard,” Hardy told The Gleaner.

“... Whenever it rains for an extended period of time, I am completely flooded out. Right as we speak (Tuesday afternoon) downstairs is under water and all my groceries are wet,” she said.

Hardy revealed that she has been in contact with local representatives of the National Works Agency, whom she has given the permission, since 2017, to reposition the drain to the side of her property.

However, she shared that despite multiple promises, no action has been taken.

“Now when the water can’t go in the drain, it comes down through my other gate and on to my land and floods the whole house. This is the third time this is happening and I am fed up,” Hardy said.

Meanwhile, on Morant Road, residents complain that floodwaters continue to undermine the thoroughfare – a refrain across the country which is grappling with a road and farm flood bill of nearly $5 billion and counting.

Denise Luney, who lives at Morant Settlement, said that the destruction of the roadway has been a recurring decimal.

“Me raise chicken and me have four bag of feeding to come up, and is on mi head I have to carry dem. No taxi don’t want to come,” Luney told The Gleaner.

Other areas in St Thomas affected by flooding, some being rendered impassable, include the Morant Bay to Port Morant, Pleasant Hill to Hectors River, Bath to Hordley, and Hordley to Haining Road.