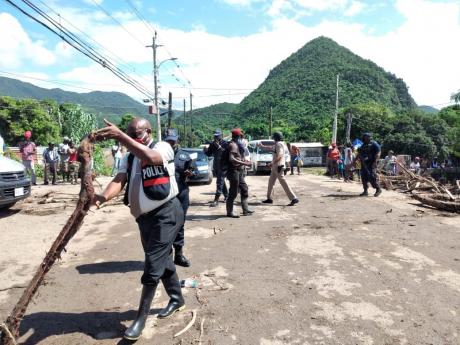 The police are now seeking to quell the tempers of angry residents of Nine Miles in Bull Bay, St Andrew.

The people have blocked the roadway to draw the attention of their Member of Parliament Juliet Holness to what they say is a major infrastructure failure that resulted in yesterday's flooding of the community.

Dozens of homes were left under water and heavy silt.

Meanwhile, the main road was a debris field this morning.

"Wi tired a dis now!" exclaimed a woman who said she has had to scrape buckets of mud from her house over the past 24 hours.

"Yesterday we ah drown down here and we nuh see nobody all now," she continued in reference to the authorities.

Frustrated motorists parked along the roadway as the people protested.

One family of five would, however, plead with the protesters to allow them passage to the Norman Manley International Airport to board a flight.

The family was eventually granted access but there was no such luck for dozens of other motorists.