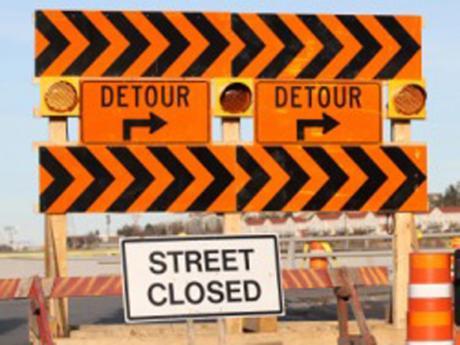 Motorists are being cautioned against using roadways and bridges that are flooded - Contributed photo.

The National Work Agency (NWA) says an assessment has shown that roadways in St Andrew, St Thomas, and Clarendon are most affected following rainfall associated with tropical storm Eta over the weekend.

Teams from the NWA are currently working to clear some 24 roadways in these parishes as well as in Manchester and Trelawny.

The agency says work to remove massive landslides along several sections of the roadway which stretches from Papine to Silver Hill Gap, as well as from Papine to Bull Bay in St Andrew is continuing.

The NWA says a section of the Gordon Town road has been significantly reduced by an extensive breakaway and cannot, at this time, accommodate single lane traffic.

Motorists are, therefore, being strongly advised against attempting to use the area.

Access along a number of roadways in northern Clarendon has also been cut off by landslides including that from Kupius to Colonel Ridge, Danks to Crofts Hill and Orange Hill to Main Ridge, the NWA points out.

The NWA says while equipment has been dispatched to clear some of these areas, progress is being hampered by material continuously falling from the oversaturated hillsides.

Roadways in eastern St Thomas continue to be impacted by flooding as sections of the Hordley to Haining, Hordley to Bath, Pleasant Hill to Hector’s River and Morant River to Potosi corridors remain impassable due to inundation.

However, the NWA team will not be able to re-establish access along the Penlyne Castle roadway today.

Sections of the Wire Fence to Warsop and Coleyville to Ballynure roadways in Trelawny and Manchester respectively have collapsed due to failed embankments while the Wait-A-Bit to Hector’s River corridor in Trelawny is completely blocked by a landslide. There is no alternative route to this roadway.

The NWA continues to caution motorists against using roadways and bridges that are flooded, travelling at high speeds on wet and heavily-silted roadways or attempting to pass sections of roadways that have either been reduced or undermined.