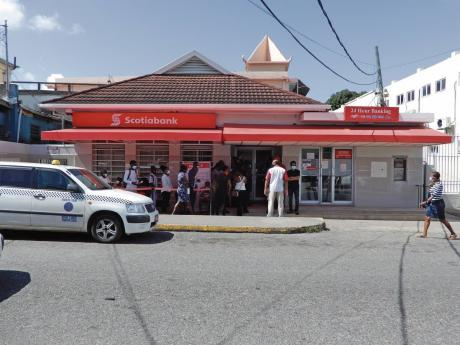 IN JANUARY 2011, Scotiabank St Ann’s Bay celebrated its 100th anniversary with a cocktail reception where several long-standing customers were honoured.

Among them was Kathleen Cynthia Graham, who, at the time, was marking 51 years as a customer. Now, almost a decade later, Graham is still a customer – but not a happy one.

Graham, like many other customers, especially the elderly, is disappointed with the bank for its treatment of elderly customers as it transitions to digital banking at six of its branches, including St Ann’s Bay, Port Maria, and Port Antonio.

The bank said that the changes would take place in 2021 in keeping with organisational needs and customer preferences.

“I’ve been a customer there since 1959, and it seems now that I’m going to have to put mi money under mi mattress because for years, they have been encouraging me to go out and use the machine. I tell them that I’m too old to learn to do anything,” Graham related to The Gleaner.

Graham said she was given a debit card several years ago but has never used it.

“I say this is the age of young people. Old people don’t exist at all,” she added sarcastically. “It’s going to be extremely difficult for older persons. We as older people, we are going to suffer.”

Prominent businessman Peter Shand is also against the impeding changes. Shand said that he has maintained a business account at BNS St Ann’s Bay since 1976 and was one of the customers also honoured in 2011. He was asked if he supported the changes.

“No. Nothing beats when you have interaction with the staff. I don’t like it, to be honest,and it’s not something I would support,” Shand said. He added that he would consider shifting his account to another bank if necessary. “I am not savvy in that regard (digital). I am very antiquated and mi naw go dung fi dem street.”

In St Mary, elderly customers at the Port Maria branch are also crying out. A customer at the St Ann’s Bay branch who disclosed that he has been banking with Scotiabank for 30 years, said he would not be affected by the changes because he does all his banking online.

“It won’t affect me that much because I use the machines more, and I do online banking,” he explained.

“But once the change is customer friendly – because they’ve been implementing a lot of changes and policies where Jamaican public nuh really equip for it, a lot of people not technologically savvy – but once it’s user friendly, I don’t have a problem,” he pointed out.

Marcia Lawrence, a customer at Scotiabank in Port Antonio, expressed disappointment at the move to go digital, which, according to her, is likely to result in senior citizens becoming victims of scamming as they will definitely require the guidance of younger persons to assist them with their transaction.

“It could very well create an opening for older persons being fleeced out of their hard-earned cash,” said Lawrence.

“Seeking assistance, even from one’s own relative, could prove to be costly as they, by means of temptation, could decide to borrow from the accounts of the elderly without them knowing. And another scenario is, how many persons over the age of 65 are familiar with online banking?”