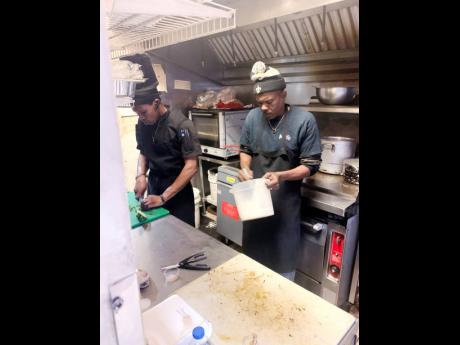 Contributed
Chefs in the kitchen at Coastline Caribbean Restaurant in Gulfport, Mississipi, in the United States.

In the city of Gulfport, Mississippi, which has a population of less than 200 Jamaican nationals, an establishment selling strictly Jamaican cuisine has been carving out its own space despite setbacks due to COVID-19, which have cramped eateries across the US.

When The Gleaner visited recently, the Coastline Caribbean Restaurant was enjoying a steady stream of customers.

“We love Jamaican food and eat here all the time. It has a special flavour and is unique in that here in Gulfport, there is nothing similar. I visited the island for a vacation and fell in love with the cuisine,” a customer, ‘Missy’, told The Gleaner.

As the woman and her two children exited the eatery, business owner Ray Muir flashed a wry smile.

But things were not always rosy for Muir, a retired civil engineer in the US Navy who hails from western Jamaica.

Mississippi has a long history of racial tensions, and Muir said that while it has been quelled somewhat, he faced an uphill battle to get his business off the ground.

“It was difficult at first. You would call and make arrangements over the phone to rent a place, and they would tell you the place is yours. When you went, however, and they saw you were black, then you got all types of excuses as to why you would not be getting it. I faced a lot of that,” Muir said.

After repeated attempts at opening a business, Muir finally got his break after the passage of Hurricane Katrina in 2005, when the coastline of the southern state was bludgeoned by the devastating winds associated with the weather system.

“The building was totally destroyed and maybe they felt sorry for me. However, I was determined to get my business off the ground, so I restored the building and started in 2008. I have no regrets,” he said.

Now, more than a decade later, the Coastline Caribbean Restaurant is a leading spot for diners with a taste for Jamaican delicacies. All of the signature Jamaican meals, including curried goat, ackee and salt fish, and jerked chicken are on the menu.

“Jamaican food sells itself. It has international appeal. I have no need to advertise anymore,” Muir said.

In addition to cooked meals, Muir also trades in Jamaican confectionery and other condiments.

“I source my Jamaican goods from Florida and Atlanta, which are both closer to the island. They are bought at a steady clip as everything to do with Jamaica has an aura to it, and our culture is well known and loved,” he said.

The Coastline Caribbean Restaurant provides employment for 10 persons, and according to Muir, it will be a permanent fixture on the culinary landscape in Gulfport.

“It is a pleasure working here and spreading the Jamaican culture here in the South of America. It is really a fulfilling experience,” the Rastafarian Jamaica-born restaurant manager, Prince, told The Gleaner.