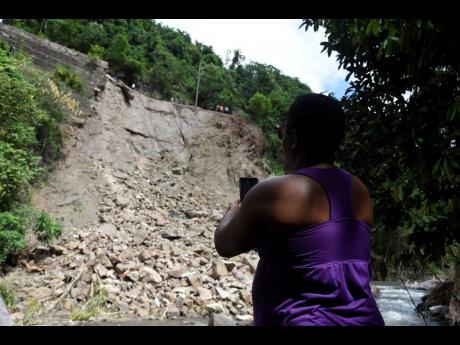 Nicholas Nunes/Photographer
Photos by Nicholas Nunes/Photographer Pauline Staples takes a photo of the collapsed hillside on which the Gordon Town main road was built, which came crashing down into the raging Hope River in St Andrew during sustained rainfall last weekend. The splash caused water to reach the second floor of her two-storey dwelling on the other side of the river. 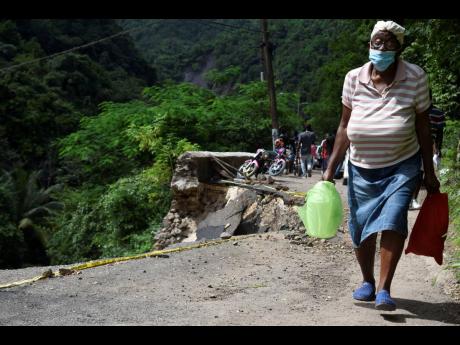 Nicholas Nunes/Photographer
With the section of Gordon Town road where the breakaway is located inaccessible to vehicles, residents have to make the trek across on foot, some having to fork out cash for bike men to take across their goods. 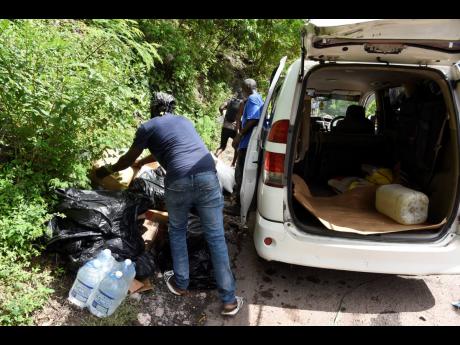 Nicholas Nunes/Photographer
A man offloads goods from a vehicle at one end of the Gordon Town road breakaway for them to be taken to the other side to board another vehicle and continue his journey.
1
2
3

‘Stand-up Hill’, the section of the Gordon Town main road destroyed by recent landslides in St Andrew, has been turned into a transportation hub where hundreds of residents for the past week have been staring down a 263-foot death drop on their way to and from home.

While state officials and engineers at the National Works Agency (NWA) contemplate a fix for the major roadway, residents of dozens of communities in rural St Andrew have been risking lives and valuables crossing the little that remains of the road.

On either side of the breakaway last Thursday, taxi operators and ‘loadermen’ sought passengers. Those like shopkeeper Deloris McLarty of Hall’s Delight in Mavis Bank made their way in single file across the sloping hillside, skipping quickly past the narrowest points of the path as the Hope River roared below.

At this hub, fares sometimes are three times the norm, but most passengers were not complaining. Instead, taxi operators are praised for exposing themselves and vehicles to the treacherous road conditions left behind by Tropical Storm Zeta and Hurricane Eta in recent weeks.

“When we come down from Hall’s Delight and stop here, we pay $300, and then we have to pay $100 to Papine. Then when we get our goods now we have to pay the loaderman dem, and then pay the busman again,” said McLarty. “This affects the little business very bad because if we should put on a little $10, the people them going to complain.

“Plus, I know this Christmas is going to be very sad because we don’t have any road. That is the main thing, plus we have COVID-19. Paying three times to come up here is very rough,” continued McLarty, dreading the impact on her livelihood this Christmas.

Taxi operator Paul Meek listed communities in rural St Andrew that had been cut off because of the major landslide.

“It is from a long time we have been trying to get a little bit more on the fare but with this now it come in like it just help that. Now the people look like they are even more willing to pay the money now than before,” Meek said.

“Some people pay $200 – all $300,” added another taxi driver, who pointed out that the cabbies have erected a light to make crossing the breakaway less frightening at nights.

It did not matter that the NWA had erected road closure signs. Desperate passengers and bikers made their way across anyway, leaving one female NWA worker shrugging her shoulders.

Some residents said they feared their fate in an emergency.

On Thursday, as the noisy scene unfolded on the road high above, hundreds of metres down and on the other side of the river facing the breakaway, homeowner Pauline Staples, also called ‘Aunty Sandra’, counted her blessings.

The serenity of her backyard was now a stark contrast to the thunderous rumble of the earth as it tumbled down the slope, taking a chunk of the road before splashing into the river next to her home. She lifted her hands to the heavens as she recalled the incident.

“It was deafening! Terrible, terrible! If you were here at the time, you would run,” Staples told The Sunday Gleane r. “When people heard what was happening, everybody said, ‘Lawd God! Sandra dem house!’ My house was full on Sunday morning with people coming to check on me,” she said, the fright from the incident now a source of humour.

“I am 55 years old and this is the first I am seeing something like this,” she explained.

“Because of how heavy the rocks came down, the water just splashed up. Trust me, it was scary,” she said, adding, however, that except for minor flooding and debris in sections of her home, she was spared the river’s wrath. “I really have to give thanks.”

Newly appointed Leader of the Opposition Mark Golding toured the area last week, noting that the road would not be an easy fix.

“It requires a major engineering solution and so the key is to open the access roads and alternatives because motorists can’t get out of there. The Savage Pen road is there, but there is a thick layer of mud and because it is a steep road, ordinary vehicles can’t go up and down it,” he said.

“Two billion [dollars] was announced initially after the first set of rains when the prime minister said about 80 roads were affected. Now, it is 200 roads. So that bill of $2 billion is definitely going to increase significantly. I don’t want to attempt to estimate, but it will be more than doubled,” he surmised, noting that those are only emergency expenditure.

Addressing Cabinet last week, Prime Minister Andrew Holness said that he had instructed the NWA to ensure that all technical works are done expeditiously to get the Gordon Town main road remedied.

“It will require a major effort and time to have the road connected at this location, given the challenging landscape ... . The road sits atop a river channel that is about 80 metres or 262 feet from the base of the road to the riverbed. This is a significant fall-off,” he explained, again highlighting the unstable hillside on the opposite side of the roadway.