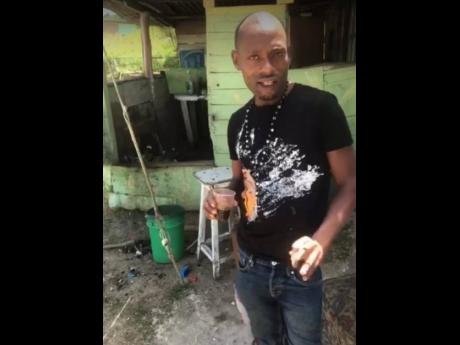 A four-year-old boy has now been left traumatised after witnessing the death of his father, a shop operator, in the Job Lane district of Christiana, Manchester, on Saturday night.

The Manchester police have confirmed the identity of the man as Kevin Ferguson, otherwise known as ‘Fire Head’, believed to be about 34 years old.

According to reports, at approximately 11:30 p.m. on Saturday, residents heard gunshots. Ferguson’s body was discovered Sunday morning by the child and the police subsequently alerted.

A relative of the deceased, who requested anonymity for his safety, told The Gleaner that Ferguson, who operated his shop for the past 10 years, had a room to the back of the building, where he would stay occasionally when he didn’t feel like going home.

The relative said Ferguson and his four-year-old son were there when he was called out in the stillness of the night and later met his demise.

“You can imagine that from 11:30 last night (Saturday) this little boy a go through this ordeal? Him watch him father bleed to death and nobody to rescue him? It’s either he didn’t know what was happening or he was very brave, because as a big man I couldn’t manage that scene. It wasn’t until me little eight-year-old cousin go tie out her goat this morning that she see the body and call for help.”

The father of three is said to have been very enterprising and was always looking for a way to better himself.

“Him do him hustling, man; he operated the shop, him buy and sell in the market, and do him mason work on the side. Him a nuh badman, and him nickname, Fire Head, nuh mean what people thing it mean. He got that name from the man who grew him, because the colour of his hair was kinda red.”

He said this has come as a shock to the community, despite the stigma of criminality that has been placed on the area as a result of wrongdoers.

“Personally, I never really liked that area where he was because you always have some man a drink and smoke dem weed. You have bad-mind people a drop them word and you know man and man, or man and woman, get in a argument ... me just never like the ‘ends’. But I don’t know what could have happened for them to want to kill him.”

The police are still investigating the matter. No motive has yet been established for the killing.