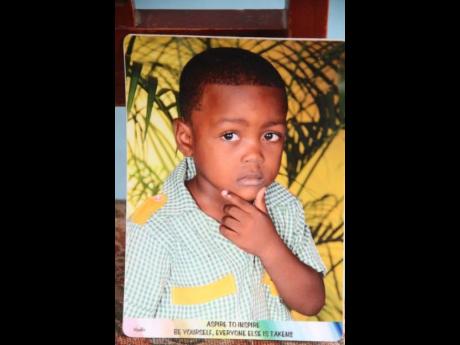 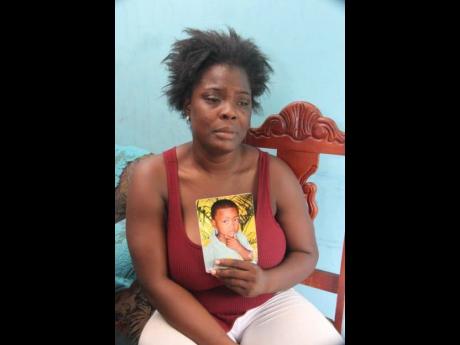 Nathaniel Stewart
Annika Davidson, grieves the loss of her six-year-old son, Oshane Banton who went missing and was later found in sewage in a pumphouse in Lionel Town, Clarendon.
1
2

Annika Davidson, mother of six-year-old Oshane Jason Banton, now has more questions than answers surrounding the death of her son, whose body was discovered in sewage at a pump house in Lionel Town.

A grief-stricken Davidson, who could not contain the tears when talking to The Gleaner, recalled her last moments with her child.

She said she was hurrying to go and see about business in May Pen and when she went into the bathroom to take a shower, her son came in there, saying he, too, wanted to take a shower.

After getting dressed, Davidson said she noted that Oshane also got dressed and asked if he could accompany her to May Pen.

At that point, Oshane enlisted the aid of his grandmother to plead his case to go with her.

“Mi madda sey, ‘No man, a May Pen she a guh, she soon come’,” Davidson said, before breaking down once more.

Recalling the life of her son, she said he was fun-loving and one that always made her smile. He was a joy to her father, who always prayed for a grandson. He took him under his wings, taking him to his workshop, which was something Oshane thoroughly enjoyed.

As a student of Watsonton Primary School in Lionel Town, Oshane harboured dreams of becoming a police or a soldier. He bragged about growing up to take care of his mother, his sister and his grandparents.

He had one dream and that was to travel. Davidson recalled him saying, “Well, fi travel you need a passport and a ticket and I don’t have that.”

She corrected him, telling him that he already had a passport, so he would only need a ticket.

“I had plans for us to travel one day …” she said, trailing off again as grief assailed her.

Davidson return from May Pen on Friday about four in the afternoon to discover that Oshane was missing.

When no one could account for his whereabout, a report was made to the police and a search launched. She was unprepared for Saturday’s gruesome discovery of her son’s lifeless body in the sewage.

Struggling to share fond memories of Oshane, Davidson said it was hard as every memory was a fond one. She shared that he would use her phone to record videos on social media site TikTok and was more than willing to put content on a Youtube channel she started but rarely posted to.

He was quick to share his knowledge, as she said he would teach both her and his grandfather what he knew.

Although an investigation of the incident is still being carried out by the police, Davidson has ruled out any thought that her son drowned or of his death being accidental.

“A nuh accident dat. The pump house lock up over deh wid key,” she raged, as she said the thought of her son being thrown into the sewage is more than she can bear.

Even in grief, Davidson had time to acknowledge those who stood by her. She hailed the police from both May Pen and Lionel Town as well as her cousin, Leonard Ramsay, who she said were quick to engage in the search and encouraged her every step of the way.