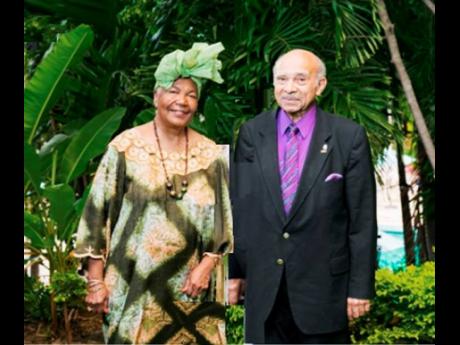 Darby founded the Folk Revue after attending the Miami International Folk Festival, which featured cuisine, music, songs and dances from around the world. Jamaica’s only representation consisted of the island’s food and beverages.

“I saw the ways in which other countries showed off their cultural heritage,” Mrs Darby says. “And I thought, Jamaica has a wonderful culture, why not put it on display, too?”

At the time, her husband Percival (everybody calls him Val) was a professor at Florida International University, and she had trained as a medical technologist. But they shared a passion for the stage.

“We met in 1957 during a production of Sunday Cost Five Pesos by my church’s theatre group,” Darby recalls. “He was a budding comedian and singer who played the lead role of Woody Mahoney in the LTM’s Pantomime production of Finian’s Rainbow. Even when he forgot his lines, his ad libs were hilarious.”

Darby decided to form a representative group to perform Jamaica’s traditional songs and dances at the folk festival. But where was she to get her performers? And her material?

She and her husband had joined the Jamaica Association of Florida to meet other Jamaicans when they moved to Miami in 1973. So, she enlisted members of that group to help put the show together. She set out to collect folk songs from the Jamaican community in South Florida – and discovered talented performers in the process.

Darby recalls that it was the proverbs, songs and dances they collected that made her fully appreciate the appeal of her native culture. Growing up in Jamaica, she had been taught to emulate British culture and to shun Jamaican folklore and Patois. At the private school she attended, she learned folk dances and songs from the British Isles, not Jamaica.

“They had us dancing Scottish reels,” Darby said, breaking into incredulous laughter. “Imagine!”

Now, she is a passionate advocate for Jamaica’s cultural heritage.

“Old time Jamaican culture is the repository of the history of the Jamaican people, defining who we are,” she says. “It is the legacy and cultural identities of our African, Asian and European forefathers, which makes our culture so unique.”

The wave of enthusiasm that greeted the Folk Revue’s first show surprised her.

“We were the ‘poster child’ of the folk festival – winning the coveted prize for the best cultural display,” she said.

Invitations from various festivals poured in after that. And the Jamaican Folk Revue has been going strong ever since.

From the beginning, their concerts included Miss Lou’s poems, but they were not the main attraction.

“We were more into the music (my first love) and dance,” Darby said. “But then I met Louise Bennett-Coverley in person – she was living in South Florida during the 1980s. She and Lois Kelly Barrow were the guest performers in one of our concerts, and we worked together on the Sister City Program, twinning Coconut Grove and Port Antonio.

“I fell in love with our culture and I thank Miss Lou, who is my personal national hero.”

“The event explores the immense influence her works have had on Jamaicans at home and in the diaspora,” she said. “Miss Lou has influenced individuals across the world. People started to realise that what we Jamaicans have – our culture – is nothing to be ashamed of. It is what makes us unique and successful in all our endeavours.

“And she showed others that Jamaican heritage stems from a myriad of histories and cultures like Scottish, British, African, Portuguese, Asian and others. To quote Miss Lou, ‘When de Asian and European cultures buck up ‘pon de African culture in the Caribbean people, we stir dem up and blend dem to wi flavour, we shake dem up and move dem to wi beat; we wheel dem and we tun dem, and we rock dem and we sound dem an’ we tempo dem an’, lawks de rhythm sweet.’”

The 10th anniversary of the festival, held in partnership with the Friends of the South Regional Broward Library, featured the launch of the Louise Bennett-Coverley Heritage Council.

“The council provides a wider scope to address different aspects of our Jamaican culture --inviting our eminent culture keepers, writers, storytellers, musicians, professors, dancers, proponents of the theatre arts – to share their knowledge, stories and experiences with Miss Lou and create a repository where others can come for information,” Darby said.

The council offers one-year scholarships to both the Edna Manley College in Jamaica and the Broward College in South Florida. So far, more than 22 students of the performing arts have received the scholarships, and, recently, the council, in partnership with the XLCR Alumni Association, has adopted the Louise Bennett-Coverley All-Age School in Gordon Town (Miss Lou’s alma mater).

Jamaica’s heritage is being kept alive in America’s schoolrooms, as well as on the stage. In 1980, Darby was asked by Miami’s Channel 2 to do a TV programme on Jamaica, and the script, Heritage, written by the late Gloria Lannaman and choreographed by the late Shirley Campbell, has been featured in educational TV specials and in schoolrooms across America.

For three consecutive years, she produced the Louise Bennett-Coverley Community Concerts, showcasing local talent. And in 2009, she produced a fund-raiser called ‘The Hon. Miss Lou’. At the fund-raiser, she officially handed over the reins of the Folk Revue to Colin Smith (of the Tallawah Mento Band) and Jennifer Grant, in order to concentrate more fully on the Louise Bennett_Coverley Reading Festivals.

In 2011, she co-wrote and produced the pantomime, Ol’ Time Sinting, as a tribute to Miss Lou (under the guidance of well-known writer and folklorist, Easton Lee, and guests starring Bennett-Coverley’s early protégés, Leonie Forbes and Volier Johnson).

In designing and making the costumes for her folk group, Darby learned to sew, and that led to development of a fashion line, ‘Anansi Creations’ (featured in a Miami magazine). She describes her fashions as “everyday clothing that utilised the bandanna material for classic fashions – and linen.”

Norma Darby (nee Wright) was born and grew up in Kingston. She first visited America in 1967 to study cardiovascular techniques in connection with her work as senior technician for the Cardiovascular Laboratory at The University Hospital of the West Indies. She returned later to join her husband, who was a student at Cornell University in Ithaca, New York.

With her husband and their two children, she made their permanent home in the US, where she studied music (her first love) at Florida International University. Their only grandchild recently graduated from the University of Central Florida.

Her husband’s career involved travelling to various countries (one assignment took them to China and he was part of the management team that opened Disney World).

Darby recalls experiencing a cultural “epiphany” when they later went to Negril, where he managed the Poinciana Hotel.

“I had the opportunity of developing the cultural aspects of the Anancy Theme Park,” she said. “And to delve into our grassroots culture … attending dinki minis, ‘nine-nights’ … visiting the Ettu people of Hanover, where they used Yoruba words and phrases of our early enslaved ancestors in everyday conversation ... learning about Goombeh in St Elizabeth (I even acquired a goombeh drum). And I was invited to be a guest judge in the JCDC’s All-Island Cultural Competitions.

“I was absolutely filled with awe at the depth and beauty – and of the overwhelming and undervalued importance of our African heritage.”

Because of health issues, Darby recently surrendered the Louise Bennett-Coverley Heritage Council’s reins to Colin Smith and Valrie Simpson, and retired to Kissimmee, Florida. But she is still engaged in guiding its activities and she is still promoting Jamaica’s culture.

She has started a “cultural connection” as an activity of a local Caribbean-American social club to share the community’s cultural diversity with her new neighbours.

So far, they have had enthusiastically received presentations from Jamaica, Trinidad, Guyana and Tobago. And club members travelled to West Palm Beach to attend the Miss Lou 100 Birthday celebration, presented by the Louise Bennett-Coverley Heritage Council and featuring the Jamaican Folk Singers in Concert, with comedienne Joan Andrea Hutchinson.

Miss Lou’s example helps to keep her going, Darby explains. “Louise Bennett and her husband moved to Fort Lauderdale early in the 1980s, and to Toronto in 1987, but they kept their Jamaican cultural identity. Miss Lou said, “Any which part mi live –Toronto-o! London-o! Florida-o! – a Jamaica mi deh!”

“I have adopted this quotation as my mantra, and my mission,‘edutainment’– educating through entertainment – is to share the magnificent culture that is our heritage. Thanks, in large part, to Louise Bennett-Coverley.”