Show more 'care and compassion' to persons with HIV- Patrick 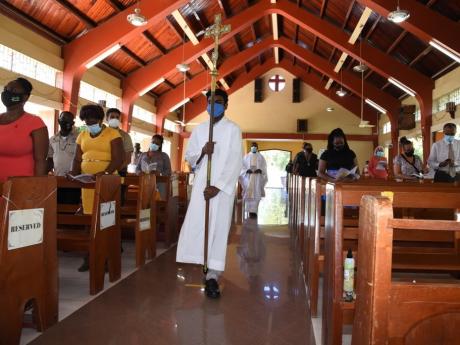 Worshippers at the Christ Church in Vineyard Town, St Andrew, gathered today to commemorate World AIDS Day, which is observed on December 1 each year.

Executive director of the Jamaican Network of Seropositives (JN+), Jumoke Patrick, has urged Jamaicans to play their part to end the AIDS epidemic by 2030.

This, he said, can be done by showing care and compassion to those living with HIV- the virus that causes AIDS and sharing facts about HIV to dispel the myths. He also asked for more to be done to promote safe sex and greater support of non-governmental organisations that seek to advance the plight of people living with the sexually transmitted disease.

Last year, 1,500 Jamaicans died from AIDS, a 15 per cent decrease when compared to the previous year's 1,800 deaths, reflecting progress in the number of AIDS-related deaths since 2010.

Patrick was speaking at yesterday’s church service in recognition of World AIDS Day, to be observed on December 1, at Christ Church in Vineyard Town, St Andrew.

The 32nd anniversary is being commemorated under the theme,'Global Solidarity, Shared Responsibility.'

JN+ advocates for the rights and concerns of people living with HIV and has more than 1,000 members.

“While we have made many strides over the years, people living with HIV continue to struggle with access to essential services, particularly in rural areas and among key and vulnerable populations that are disproportionately at risk,” Patrick explained.

He said the challenges include stigma and discrimination; breach of privacy and confidentiality and stigma regarding getting tested.

“These difficulties persist in large parts due to myths, taboos and a culture that is still afraid to discuss healthy sexual behaviours. Seemingly simple, these factors threaten the efficacy and effectiveness of our response,” he said.

COVID-19 disrupted the income of more than 340 members, particularly those who work in the hotel industry.

“We had to support them with care packages and personal protective equipment  through support from Food for the Poor, Ministry of Health, UNAIDS, USAID and other partners. So far we have provided over 3,000 care packages and we continue to do so because COVID is still here,” he shared.

Also, with limited knowledge about the risks of COVID-19 among persons living with HIV, especially during the early stages of the COVID pandemic, Patrick said there was reluctance among members to visit healthcare facilities and pharmacies, because their immune systems were already compromised.

“The further away you are from the Kingston Metropolitan Area, the more impacted you are."

"We had to go for people in the rural areas to take them to the doctor, provide food for them and transportation stipend. We had to take direct steps to help those persons so they don’t default on their treatment,” the executive director revealed.

He said sensitisation was key to getting back some of its members on track with treatment and, as a result, they began to make their usual trips to the pharmacy for anti-retrovirals, as despite having a policy to dispense drugs several times per month, the government has only authorised monthly dispensing in order to avoid running out of stock.

He added that on average, there are 1,200 to 1,500 new cases of HIV per year, but this year’s figure to date has not yet been ascertained.

Plea for more education about HIV/AIDS

In his sermon, Reverend Sean Major-Campbell appealed to Jamaicans to educate themselves, as fear of the unknown and the prevalence of ignorance perpetuates much of the discrimination faced by people living with HIV.

He recalled his days of attending World AIDS Day vigils in The Cayman Islands where “it did not matter who you were, the assumption was that if you do any advocacy around HIV work, then you had AIDS.”

He continued:“One of the things about human rights work is that you have to be prepared to be a minority who also experiences stigma and discrimination when you speak up for what is right.”

With the COVID-19 pandemic and AIDS epidemic, the clergyman said now, more than ever, global solidarity is needed.