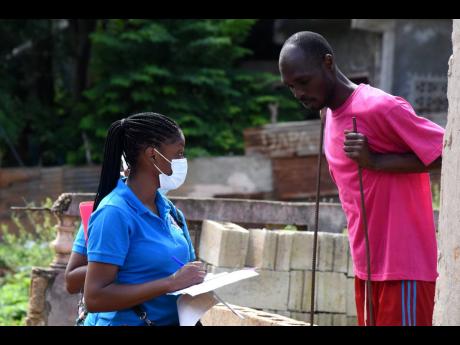 Kenyon Hemans/Photographer
A healthcare worker interacts with a resident of Frazer’s Content, St Catherine, on Saturday as community surveillance was conducted in the community to raise awareness and test persons for the virus.

Lingering concerns about stigma surrounding the new coronavirus continue to hamper mobile testing campaigns, and cultural ambivalence about the dangers of an outbreak is also presenting unwitting resistance to safeguards amid a second deadly wave.

Despite sensitisation drives, many Jamaicans remain more fearful of backlash and discrimination from their neighbours than the clutches of the virus, which had, up to Saturday, killed 238 people here and infected 10,284.

A Ministry of Health and Wellness team, comprising public health nurses, registered nurses, and public health inspectors, fanned out across Frazer’s Content and Linstead, both in St Catherine, in Saturday’s community surveillance aimed at raising awareness of the virus’ profile.

Stephenson acknowledged that some residents disclosed that they were fearful of returning to their communities because of threats of violence from ignorant neighbours.

“As a result of the positive cases that we know about in the community so far, our mission is to break any further transmission of the virus,” Stephenson told The Gleaner.

Frazer’s Content has returned five positive results recently, which has drawn scrutiny from health officials to assess the depth of spread.

Some residents of Frazer’s Content lauded the efforts of the healthcare professionals to rid the community of COVID-19, but others expressed concern about the presence of the group.

“This is very encouraging to see that they are bringing the tests to us. This is something that should have been done long ago, as there are cases here, but people are afraid to get tested,” Marigold Clacher said.

A maskless Angela Samuels, who resides on Brivate Road in Frazer’s Content, said she was not fearful about a potential outbreak in the community.

“This is a closed community. We don’t let no one in and we keep our distance, so I am not worried,” she said.

However, Rupert Henry, who lives on the same street, is more sceptical, saying that he was aware the virus could spread like wildfire.

“I am taking this very serious, because if it starts to spread, a lot of us will get it, so I am following the protocols,”he said.

Keisha Samuda was one the first persons to get tested. She was prompted to do so after she heard that persons in the community had tested positive for the virus.

“I heard that the health team was in the community, so I decided to get myself tested because you never know, and it is important to know because I could be asymptomatic,” said.

But over in Linstead, a major shopping centre that was a hive of activity on Saturday, the response was less positive.

After three hours, 13 people had submitted to COVID-19 tests.

Health workers conducting the tests attributed the dismal showing to persons having to do their shopping on Saturday, thus struggling to find time.