Children of Parade Gardens plead for peace during Christmas 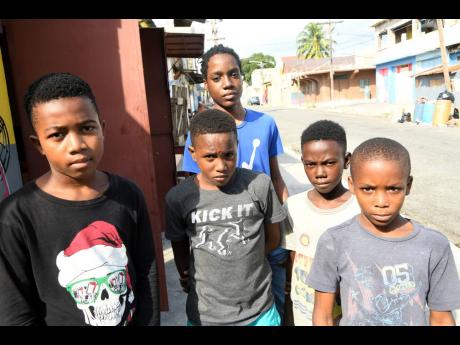 Rudolph Brown/Photographer
From left: Devrughn Davis, Dayvion Campbell, Dimanie McFarlane, Deeon Williams and Odane Hill, (standing at back) talk to The Gleaner on Thursday about what they want for Christmas. The youngsters live in the troubled Tel Aviv community in downtown Kingston.

The children of Parade Gardens in Central Kingston have added their voices to the cries by some adults for the warring factions in the community to halt the violence as the Christmas season approaches. One teenager’s wish for the holidays is a PlayStation Four, so that he can remain safely indoors, away from bad influence.

Camperdown High student, Odane Hill, says he would also be happy if he could get a chest of drawers this Christmas, to properly store his clothes that often get damaged by insects and become mildewed when it rains heavily.

But the storage situation is not so much a priority as the PlayStation Four for the 15-year-old, who told The Gleaner that he sometimes hangs out with friends on the corner.

“With what a gwaan right now, mi modda try get me fi stay in. War a gwaan and, if mi nuh stay offa di road, mi probably dead or something. I need something to help me stay in, because she nuh want me fi get inna trouble. Some of the times, I come out and talk to friends and play basketball, but Mommy sit mi down weh day and explain the importance of staying in,”he says.

He adds that, based on the propensity for violence in the community, it was easy for the youth to be drawn towards a criminal path, but he has no intentions of falling into this trap.

“It is easy to turn a gunman because you will have people who will introduce it to you. But mi modda seh, when dem come to mi, tell them no, because police ago run you down and you affi deh all over the place. The PlayStation can keep me in, because I can talk to my friends online who have the same thing.”

Twelve-year-old Denham Town High School student, Dilanie McFarlane, also from Parade Gardens, pointed out that frequent gunfire exacerbates his sleeping problems, as he already has to share a small bed with his two brothers.

His Christmas wish is for a tablet for school and a bed for himself.

“I want a tablet and a bed. The bed small and every minute me a drop off when me a sleep. I don’t have a tablet, so they give me test papers. I would be able to see the teacher in the class if I had the tablet,” he told The Gleaner.

Residents corroborated the children’s stories on the need to stay off the streets as they face heightened incidents of violence in the community.

The adults requested anonymity owing to fear, but were adamant that they wanted the fighting to cease. Business people and the elderly said that many residents might spend their Christmas indoors.

One elderly woman told The Gleaner that, despite having her required medication, her blood pressure rises every time she hears gunshots.

“It affects old people because I have to be taking medication. Mi inna mi sleep and all you hear is gunshot. We want peace inna di community.”

One businesswoman is fearful that, based on violent incidents in Central Kingston communities like Tel Aviv, Spoilers and Southside, the children will not enjoy the Yuletide season.

“We done have COVID already. We can’t take nuh more gunshot. We a beg dem, please. Dem can done now. Enough is enough. You open your shop and when you take a stock, a pure gunshot and everybody a run up and dung. We begging the gunmen to put down their guns. Christmas is coming and we have business people in the community. So we the people of Parade Gardens are pleading for peace, love and unity,” she added.