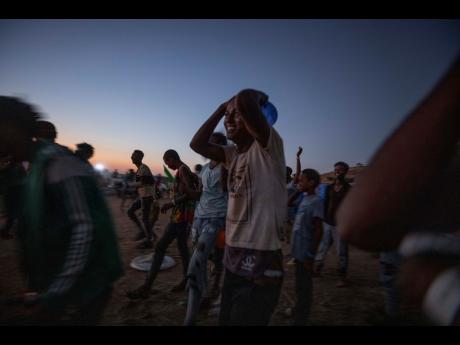 Tigray men who fled the conflict in Ethiopia's Tigray region, run to receive cooked rice from the charity organisation, Muslim Aid, at Umm Rakouba refugee camp in Qadarif, eastern Sudan yesterday. Ethiopian Prime Minister Abiy Ahmed again ruled out dialogue with the leaders of the defiant Tigray region Friday, but said he was willing to speak to representatives "operating legally" there during a meeting with three African Union special envoys trying to end the deadly conflict between federal troops and the region's forces (AP photo).

(AP)- Ethiopia’s military has gained “full control” of the capital of the defiant Tigray region, the army announced today, after the Tigray government reported that the city of half a million people was being “heavily bombarded” in the final push to arrest the region’s leaders.

“God bless Ethiopia and its people!” Prime Minister Abiy Ahmed said in a statement declaring that the taking of Mekele marked the “completion” of the military offensives that started nearly four weeks ago. “We have entered Mekele without innocent civilians being targets,” he said.

Now, he said, police will pursue the arrest of the leaders of the Tigray People’s Liberation Front, who run the region and dominated Ethiopia’s ruling coalition before Abiy came to power in 2018 and sidelined them among the sweeping reforms that won him the Nobel Peace Prize.

Abiy’s government has since accused the TPLF of inciting unrest in the country and seeking to reclaim power, and each government regards the other as illegal. Abiy has rejected dialogue with the TPLF leaders over the past month, including during a Friday meeting with three African Union special envoys.

“We now have ahead of us the critical task of rebuilding what has been destroyed...with the utmost priority of returning normalcy to the people of the Tigray region,” Abiy said.

Some Ethiopians at home and in the Diaspora rejoiced at the news that Mekele was under the military’s control. “Praise God for his mercy upon us. Thanks to the Almighty God our creator. Amen. Let peace prevail in Ethiopia!!!” former Prime Minister Hailemariam Dessalegn tweeted.

The fighting has threatened to destabilise Ethiopia, which has been described as the linchpin of the strategic Horn of Africa, and its neighbours.

As international alarm has grown since the conflict began on November 4, so has a massive humanitarian crisis. The Tigray region of 6 million people has been cut off from the world as the military pursued what Abiy called a “law enforcement operation” with air strikes and tanks.

Food, fuel, cash and medical supplies have run desperately low. Humanitarians and human rights groups said several hundred people have been killed. Nearly 1 million people have been displaced, including more than 40,000 who fled into Sudan. Camps home to 96,000 Eritrean refugees in northern Tigray have been in the line of fire.

With communications severed, it is difficult to verify claims by the warring sides. The Tigray leader, Debretsion Gebremichael, could not be reached this evening. The heavily armed TPLF has long experience fighting in the region’s rugged terrain, and some experts had warned of a drawn-out conflict.

The TPLF turned churches, schools and densely populated neighbourhoods in Mekele “into armament stores and launching pads,” senior Ethiopian official Redwan Hussein asserted in a Facebook post. He said “scattered remnants” of the TPLF fighters were carrying out “sporadic shootings” in neighbourhoods.

The shelling that began earlier Saturday in Mekele, a densely populated city, immediately raised concerns about civilian casualties. Ethiopia’s government had warned Mekele residents there would be “no mercy” if they didn’t move away from the TPLF leaders in time. The United Nations said some residents fled as tanks closed in and Abiy’s 72-hour ultimatum for TPLF leaders to surrender expired.

Alarm spiked anew on Saturday, as Ethiopian forces appeared to be realising the “final phase” of the conflict.

“I invite everyone to pray for Ethiopia where armed clashes have intensified and are causing a serious humanitarian situation,” Pope Francis tweeted.

“Fighting and shelling in the Mekele area are a very grave concern. We urge an immediate end to conflict and restoration of peace in Tigray,” the top US diplomat for Africa, Tibor Nagy, tweeted.