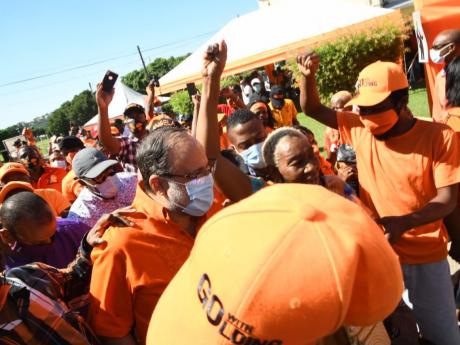 President of the People's National Party and Opposition Leader, Mark Golding is flanked by supporters, as he arrives at Jamaica College this morning for his first meeting of the National Executive Council (NEC) as party president. Today's NEC will also elect a new general secretary and chairman of the PNP.

The first meeting of the People’s National Party's (PNP) National Executive Council (NEC), since the November 7 presidential election, is underway at Jamaica College in St Andrew.

The NEC is the PNP’s highest decision-making body outside of its Annual Conference.

Today's NEC will elect a new party chairman and general secretary. There are 284 delegates eligible to vote.

The Golding-backed Dr Dayton Campbell will contest Raymond Pryce, the former deputy general secretary and attorney-at-law Jennifer Housen for the position of general secretary; while Dr Angela Brown-Burke, who also has the backing of Golding will contest PNP vice-president Phillip Paulwell to become the first woman to be chairman of the party.

Paulwell had supported Hanna in the November 7 presidential election.

Meanwhile, all eyes were on the lookout for November 7's losing candidate Lisa Hanna, the member of parliament for St Ann South East, who had been below the radar since the election. She resurfaced this morning, greeting familiar faces at the meeting.

PNP President Mark Golding arrived shortly before 11:30 a.m. to chanting supporters who flocked him as he made his way to the auditorium. He is expected to make his first address to the NEC as president this afternoon.