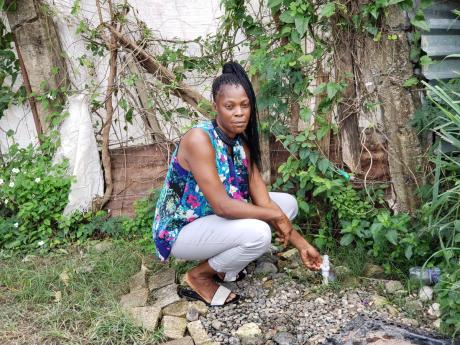 Photo by Shanna Monteith
Jacqueline Prendergast illustrates the low volume of water coming from the standpipe in Norris, St Thomas.

Residents of Norris in St Thomas are voicing their frustration with the inconsistent or negligible supply of water to the eastern Jamaica community, a grouse they say dates back more than 20 years.

They say they have not been benefiting from a major catchment in the area and are calling on the National Water Commission to address their concern.

Jacqueline Prendergast disclosed that residents often gathered at a stand pipe at nights, hoping to fill their containers.

“We have a water source in such close proximity to us, and it’s so frustrating that we don’t have water at all to use. There is also a standpipe down the road, and the little water that comes from it sometimes, as soon as people see that there is water, they put hose on it to catch for themselves and none comes to the houses,” said Prendergast.

Prendergast, who was among several residents gathered at the standpipe in the community on Friday, said that although water is trucked to the community occasionally, it is never enough to fully satisfy all her domestic needs.

“The only way I get to use the shower is when the water truck comes and fills the tanks and you might t’ief a one or two shower from it, but you have to still preserve water, so you can’t do that often,” she said.

Prendergast also lamented that householders often waited days for the water truck to arrive “because there are so many persons here without water, so he has many areas to cover”.

Exasperated, another resident, Norma Campbell, explained that the lack of running water has been a nuisance to the operations of her cook shop.

“There are days when I can’t work because I don’t have any water. When it’s food you’re dealing with, you need clean, running water to not only cook, but to wash up, and so forth.

“I have to pay someone to full my drums, and every now and then, the water truck will come and fill the tanks,” Campbell told The Gleaner.

The residents shared that despite the lack of consistent service, they were still being billed for water each month - sometimes exorbitantly.

“We report it over and over until the representative dem start give me attitude because I can’t understand how dem charging us for something we not getting. We need to hear from somebody because it can’t work, man,” Campbell added.

A comment from National Water Commission Corporate Public Relations Manager Andrew Canon was not forthcoming up to press time.