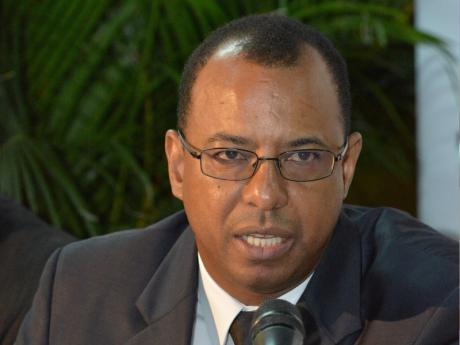 Businessman and former People's National Party (PNP) treasurer, Norman Horne is rejecting claims that withdrawing his nomination as an opposition Senator is dependent on the party repaying him a $10M debt.

Horne was one of eight senators nominated by then Opposition Leader Dr Peter Phillips. But he had declined it, saying that he would allow the new party president to make the decision.

On Wednesday, new Opposition leader Mark Golding announced that Peter Bunting, who lost his Manchester Central seat in the September 3 general election, was his pick to replace Horne.

However, Bunting's expected swearing-in on Friday was thwarted as it emerged that Horne did not formally indicate to the Governor General, who makes Senate appointments, that he was declining the nomination.

In an October 7 letter, Horne addressed issues related to monies owed to him by the party, fuelling speculation over the reasons he may not have formalised his rejection of the Senate nomination.

It is incorrect and irresponsible to link an October 7, 2020 letter to the former General Secretary of the People’s National Party to whether or not I will take the Senate oath. That October letter was an administrative accounting of the Party’s revolving debt beginning in 2015 and not a request for immediate repayment of the sum.  It was written before the 2020 presidential race and before the October 10, 2020 media release stating my intention to decline the senate appointment. Let me categorically state that:
1. It is unfortunate and manipulative that anyone would seek to create a nexus between letters written in October 2020 and the issue of my impending resignation from the Senate;
2. At no time have I requested from the Party leader, Mark Golding, or any Officer of the Party the repayment of the outstanding sum;
3. In responding to a WhatsApp message from the Party Leader, I sought an acknowledgement and payment plan for the existing debt which is completely different from what is being erroneously purported; and
4.  Following his election, at no time has the Party Leader, the General Secretary or any Officer of the Party requested a meeting with me to discuss my resignation from the senate. My only communication with the Party Leader has been by WhatsApp, the contents of which he is at liberty to share.

For full disclosure, I have had reason to pause. I am particularly disheartened by the conduct of the Party Leader and his inner circle which is not at all aligned with his pledge of unity. Many of us assumed that the unity pledge was made in good faith and that a genuine effort would be made by both the Leader and his team.  There is no place for arrogance if it is that the leadership intends to unite.

It must be more than talk and not a public smokescreen. It must go to the core of the movement.

During this time, I would humbly advise that the Leader take a conciliatory, as opposed to a dismissive and dictatorial, approach. He should communicate with party members with respect and sincerity. WhatsApp is not an appropriate means of communication for matters deemed to be of the highest importance by either the Party Leader or by any comrade. Respect begets respect.

It is for these reasons that there is a widening divide within the PNP, and also why 3 of the 14 Members of Parliament did not endorse the Party Leader’s letter to the Governor General to affirm him as the Leader of the Opposition.

Additionally, there is extreme concern that at this point the Party is still unable to adhere to the principle of managing internal issues without taking these issues to the media. Subterfuge and “unnamed sources” remain the order of the day. Senator Damion Crawford is the latest victim of what seems to be a one-sided effort to leak private communications to undermine the credibility of senior comrades and the Party at large.

The party President is right in his edict that to be a good political leader one must not simply be “a nice guy” since any such charade would be counterproductive. Team Leadership is an art that entails effective communication skills, soberness, emotional intelligence, impartiality self-assessment, sincere reconciliation and utmost authenticity.

It is early days under Mr. Golding’s leadership and at this stage, I still trust that he will take every opportunity to learn the parameters on how to relate to the membership in the most appropriate way. Disrespect will never give birth to unity. Any matter that is unresolved must be resolved in keeping with the principles and true spirit of Team Leadership.