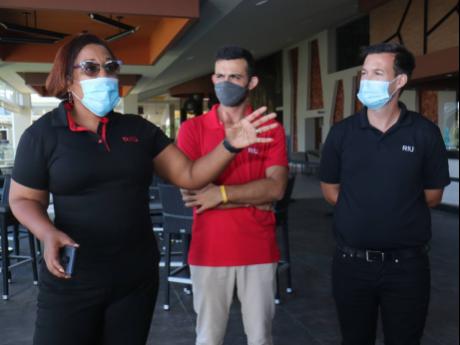 Jamaica’s airline partners have committed 1.1 million seats for the upcoming winter tourist season, as the island seeks to regain its footing in the marketplace.

Of that number, some 450,000 are seats added from the United States, the country’s largest source market, Director of Tourism Donovan White told industry stakeholders during the reopening of RIU Montego Bay in Mahoe Bay, St James, on Saturday night.

Confident of the prospects and tourism’s resilience, coming out of a battering by COVID-19’s devastation of the industry, White admitted that although the number of seats were 40 per cent fewer than the last winter season, the country was significantly up from where it was in the fall – the period that just ended.

He said the seat count has doubled between January 2021 and April 2021, which fall in the traditional winter tourist season, which starts December 15 and ends April 30.

News of the commitment by the island’s carriers was met with enthusiasm by the industry, which is only just raising its head from ground zero.

Since June 15, when the country’s airports reopened, hotel occupancy levels have run between 20 to 60 per cent, with the majority of hoteliers getting the bulk of their business from the local market.

And like RIU Jamaica’s director of sales and marketing, Niurka Garcia-Linton, the tourism director says neither airline partners nor tourists have lost an appetite for travelling.

“To have our airline partners out of the US commit to that kind of seat load, additionally for the winter, at a time when the industry is rebounding, is extremely good for us. It’s a massive sign of confidence in Jamaica,” White stated, adding that it was critical to continue to work towards rebuilding the industry over the next two years.

White said the Jamaica Tourist Board, which is the marketing arm of the Ministry of Tourism, was seeing a consistent growth in demand for Jamaica.

He noted that those numbers were continually going up, particularly now in places like Europe and Latin America, where the markets are beginning to come out of their second wave and get settled again.

Acknowledging what the rest of the industry has accepted, the tourism director noted that the process of recovery would be long, but there would be continuous efforts to stimulate demand in the marketplace.

“It is a continuum in terms of continued growth and continued confidence,” White said.

With RIU Montego Bay being the newest plant on the product listing, White noted that the hotel chain, which remains one of the country’s largest, continues to improve its offering, ensuring a better experience for the visitor.

The hotel has increased its room count by 145 and now boast 826 rooms.

“It is very important for our industry to grow and expand our room stock because that is part of the product that we offer to the world,” said White.