China's role in C'bean still major concern for US 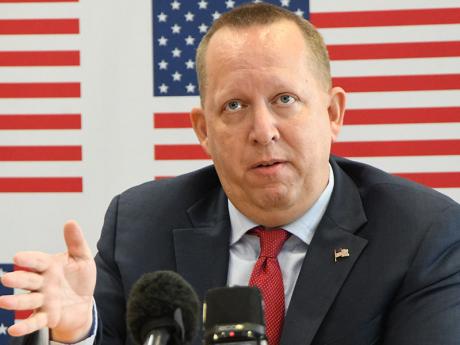 McIntyre: I think we wanted to make it very clear the dangers China poses in this area which is the future of telecoms.

United States authorities have admitted that China’s role in the Caribbean remains a talking point in discussions on a range of bi-lateral and other issues of national interest among the US and its regional partners.

John McIntyre, charge d’affairs at the United States Embassy in Kingston, says the role of China in the region formed part of the December 3, ‘Jamaica Strategic Dialogue’ between US and Jamaican officials.

The dialogue was led by US Under Secretary for Political Affairs, David Hale and Kamina Johnson Smith, Jamaica’s foreign affairs and foreign trade minister.

Quizzed about US security concerns about Chinese technology giant, Huawei's 5G technology, McIntyre said the US would not dictate to any sovereign country what decisions should be made in terms of its acquisition.

“Every country is a sovereign nation and is expected to make its own decision but I think we wanted to make it very clear the dangers China poses in this area which is the future of telecoms,” McIntyre told journalists at a press briefing earlier today.

Nan Fife, the State Department's director of Caribbean Affairs, said the inaugural virtual meeting between Washington and Kingston, provided a platform to discuss how they can build on the existing strong bilateral economic, health disaster resilience and security cooperation.

She said it is intended to have this dialogue annually to facilitate continuing collaboration on the important priorities of both countries.

The US government, including President Donald Trump, has openly discussed its concerns about Chinese 5G technology, citing national security risks.

United States Ambassador Donald Tapia has also spoken of his unease with the technology and has even warned the Jamaican Government of potentially hidden Chinese intent in the affairs of the country.

In recent controversial tweets, the ambassador said that Chinese technology company Huawei "has a history of spying and supporting authoritarian regimes".

The Jamaican Government has been mulling the introduction of 5G mobile technology, with emphasis on the Spectrum Management Authority's recently tabled annual report for 2019/2020, which stated its objectives to prepare Jamaica for 5G services.