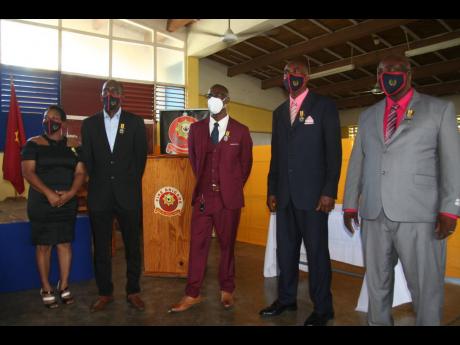 While the ongoing COVID-19 pandemic prevented them from being a part of the customary King’s House pomp and pageantry, the five Hanover-based fire-fighters who were selected for the 2020 National Awards got their awards in at a ceremony in the parish.

The five firefighters, donned in their finest, were presented the awards in the presence of close family members and the top leadership of the Hanover division of the Jamaica Fire Brigade. The ceremony was held with COVID-19 health and safety protocols in place.

Within the Jamaica Fire Brigade (JFB), the Medal of Honour for Meritorious Service is awarded to those of its members who have displayed conduct of bravery, and performed distinguished service; while the Medal of Honour for Long and Faithful Service is only awarded to sub-officers and firefighters who have completed 18 years of continuous service with exemplary conduct and character.

In his address to the awardees, the custos, who handed out the national insignia, praised the firefighters for their yeoman service and commitment.

“A national honour is not something that you get every day, and I guess the awardees would want to share the moment with their families,” Stair said. “I would like to commend the local leadership of the Hanover division of the Jamaica Fire Brigade for staging the function. I think it is a wonderful gesture.”

Acting Deputy Superintendent Oniel Henry, the officer in charge of the Hanover division of the JFB, in addressing the short ceremony, lauded the four men and one woman, who were given awards, hailing their immense contribution to Jamaica.

“Today we gather here not just to celebrate the achievements of these great individuals, but also to give due regard to the values and morals these awardees exemplify, such as integrity, bravery and discipline,” said Henry. “They have worn the JFB brand with honour.”

In giving a response on behalf of the awardees, Assistant Superintendent McLaren-Snow thanked all the persons who have contributed towards the development of all the awardees, inclusive of families and co-workers.

“Everything we think, everything we feel, every action we take is because of our beliefs and values. Our values shape our decisions, and our decisions shape our lives. Our values signify what is truly important to us, and today I can safely say that one of our values that have helped us to be here this morning is about service,” said McLaren-Snow, who further noted that service to humanity is the only path to greatness.