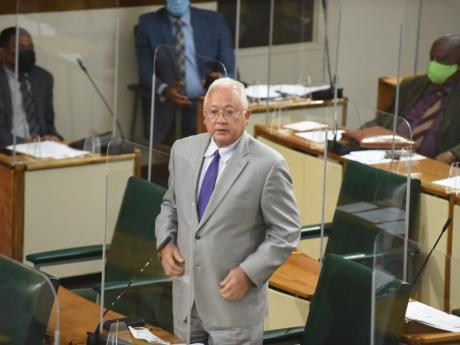 Minister of Justice Delroy Chuck speaking in the House of Representatives on December 8, 2020 - Kenyon Hemans photo.

Minister of Justice Delroy Chuck says the Government is currently crafting legislation to allow judges of the Supreme Court and the Court of Appeal to continue serving in the judiciary after retirement.

At present, these judges retire at the age of 70.

Chuck said that the draft bill was seeking to allow retired judges to serve periodically or to be engaged contractually for up to two years to help reduce the backlog of cases in the courts.

In a statement to the House of Representatives today, Chuck hailed retired Court of Appeal President Dennis Morrison for his sterling service to the judiciary.

Court of Appeal judges are to increase further to 13 by early next year.

Chuck urged the judiciary to move swiftly to reduce the backlog of cases in the system.

The justice minister said one of the last judgments from the Court of Appeal that he was now reading had its hearing in 2016 and the ruling was handed down two weeks ago.

He said that four-year delivery of judgment should be a thing of the past.

“It is important that we send the message to the courts that the citizens of this country deserve to have justice delivered in a timely manner and the judgments are part of the delivery of justice,” Chuck said.

He urged the new president to ensure that a first-class facility is backed up by first-class delivery of justice.