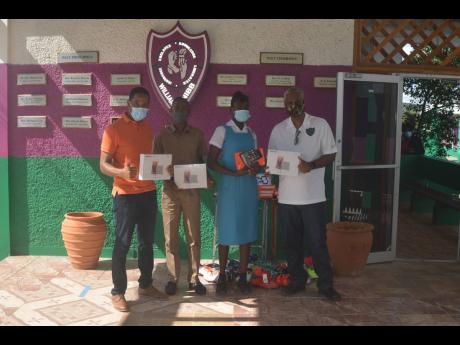 Photo by Christopher Thomas
From left: Linvern Wright, principal of the William Knibb Memorial High School, and students Anthony Smith and Briana Williams pose with Paul Williams, a member of the graduating class of 1988. They were attending a brief handover ceremony on Tuesday where 18 tablets and 15 pairs of football boots were donated to the school.

William Knibb Memorial High School alumni came good for the Trelawny-based institution on Tuesday when they handed over a generous donation of tablets and football boots to assist current students with their academic and sporting pursuits.

Paul Williams, a member of the Class of 1988, made the presentation of 18 tablets and 15 pairs of football boots at a brief handover ceremony at the school. The gifts, which were procured through past students who are based in the United States, Canada, and England, will see three additional tablets and another 42 pairs added to the items received.

Briana Williams, an eighth-grader, expressed gratitude for the computers, as she was one of several students who had challenges accessing online classes.

“I feel happy about the handover because I had been missing out on some of the classes ... . I am happy we got the tablets,” said Briana.

“I have a phone, but some of the educational apps are not working on it, so I had to borrow my mother’s phone, and it was inconvenient for us.”

The past students have been providing the school with football boots since 2016, but the drive to donate tablets began in October. All the items were sent to the school with the assistance of Denise Morgan, sister of the late past principal, Alcia Morgan-Bromfield.

Linvern Wright, current principal of William Knibb, was grateful for the donation.

“We have been struggling with many of them not having gadgets, and now that we have some donations [of tablets], it will give a boost, especially to many of those who really are interested but did not have the means,” said Wright.

Williams said that school’s Under-14, Under-16, and daCosta Cup football teams will all benefit from the football gear.

“We are doing this event publicly for total transparency for all the donors who gave us the boots and the tablets,” said Williams.

“We want them to know their donation is going to the school.”