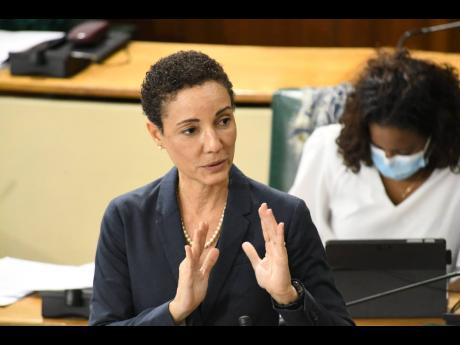 Member states last week reached a political deal on the text for the new partnership agreement that will succeed the Cotonou Agreement.

Details on the new agreement have been withheld, as member states are yet to approve, ratify and sign off on it.

Speaking on behalf of the Caribbean group, the minister said that she is pleased that negotiations with the European Union (EU) have concluded with the emergence of an agreed text of a Caribbean Regional Protocol.

“Once the post-Cotonou Agreement has been initialled and subsequently signed in Samoa, let us ensure that this landmark agreement is effectively implemented in a manner that takes the OACPS-EU relationship to a higher level, that enables the Caribbean-EU partnership to realise its full potential that advances sustainable development in all our regions, and that further sustains intra-OACPS cooperation,” said Johnson Smith.

“Our region’s consistent declaration of a strong preference to see the issues of migration and mobility treated as a full title has been addressed under the title on human development and social cohesion,” she said.

The minister noted that, similarly, compromise language on seabed mineral resources has emerged and been settled, notwithstanding the previous ministerial-level agreement.

Commissioner for International Partnerships and EU chief negotiator, Jutta Urpilainen, said: “Today’s deal marks a step towards a new era for the EU, Africa, the Caribbean and the Pacific.

“People in those four regions of the world will benefit from this ambitious agreement that will allow us to better deal with the new realities and challenges as global actors,” stated Urpilainen.

Professor Robert Dussey, Togo’s minister of foreign affairs, African integration and Togolese abroad, and the OACPS’ chief negotiator and chair of the Ministerial Central Negotiating Group, said the political agreement reached paves the way for a modern and more committed partnership at the national, regional and international levels.

The new agreement covers a large number of areas, ranging from sustainable development and growth to human rights and peace and security, and will be geared to empower each of the respective regions.

Once in effect, it will serve as the new legal framework and guide political, economic and cooperation relations between the EU and 79 members of the OACPS for the next 20 years. This include 48 countries in sub-Saharan Africa.

Although a political agreement has been found, the application of the Cotonou Agreement will be further extended until November 30, 2021, unless the new agreement enters into force or is provisionally applied before that date.

The EU is the Caribbean’s major donor for grant funding, which flows from the Cotonou Agreement.

Jamaica has been in a treaty relationship with the EU since 1975 and from that point up to the year 2000, that arrangement has covered development support and trade in several other areas.