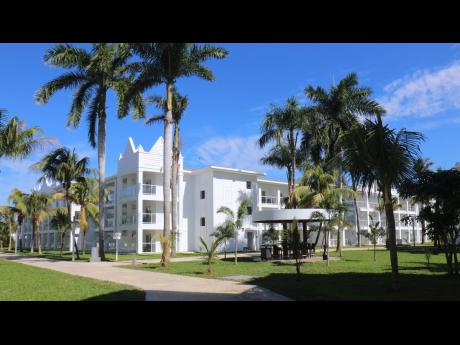 RIU Resorts has spent millions of dollars on its largest Montego Bay hotel, unveiling a brand new state-of-the-art contemporary plant into the Jamaican tourism sector, accepting adults only, after closing eight months ago for massive renovation.

An adults-only waterpark, five innovative swimming pools, six restaurants, including its signature Kulinarium, a cutting-edge, up-to-the-minute sprawling lobby and 145 additional rooms are among the improvements made to the Montego Bay resort.

The property, constructed in 2008, reopened officially last Thursday, bearing a different tone and concept for which it had become known. For 19 years the resort operated under the chain’s ‘Classic’ brand, accommodating families. However, the new RIU Montego Bay has joined its adult-only sister resorts, RIU Palace Montego Bay and RIU Reggae.

“This kind of investment speaks volumes of the commitment that RIU has in Jamaica and it’s one of the reasons why we have five of our six hotels presently opened,” Niurka Garcia-Linton, RIU Jamaica’s director of sales, told The Gleaner.

Garcia-Linton could not confirm the monetary value of the investment in the Montego Bay resort, but with similar renovations at the 901-room RIU Ocho Rios costing US$83 million a year ago, it is estimated that the same amount was spent in the tourism capital.

Garcia-Linton also spoke about the amount of research that went into the adults-only concept now adopted for Montego Bay. She said, “Our company does not do anything lightly. There was a lot of talks to our tour operator partners, and retail travel agents, and after a lot of discussion, the company decided that it is a segment of the market that is growing, that has a great demand.”

Pre-COVID, RIU Reggae which adjoins Montego Bay, an adults-only resort, was practically 95 to 100 per cent full throughout the year.

According to Garcia-Linton, it was amazing how they were forced have to deny requests for rooms because of the kind of demand. “It was one of the main factors that the company used to say, give it a try.”

When asked about making such a significant investment during a pandemic that literally wiped out the tourism sector, the director of sales responded that once RIU invests in a destination, their commitment goes all the way.

Moreover, the industry has proven to be very resilient, and Jamaica has done an excellent job in creating a set of protocols that has made the destination a safe one.

“Protocols that the industry has embraced and enhanced, that has created a safe environment for the staff and guests alike,” she said.

She said The Splash – Water World would become a candy store for big kids.

“We have also added a bigger selection of our theme restaurants, with the Kulinarium, which has become a signature restaurant for the Classic hotels; changed the structure, in all the public areas, where we have pools for just activities, a lazy pool for quiet time, swim-up bar for partying and 826 new rooms.”

There has been a complete renovation in décor, furniture, tiles, and food and beverage areas.

Having so many hotels in so many destinations gives RIU the ability to try new and different things, stated Garcia-Linton. However, this would not have been possible without the great support from the local market. “A market that has always been very instrumental, but has exceeded our expectations.”

RIU Jamaica operates six hotels and 3,000 rooms in Jamaica, and the minute the destination reopened after lockdown in March, RIU was there opening too.

“We knew we were going to depend on the local market, an awesome market from day one,” Garcia-Linton stated, lauding the Jamaicans who vacation at the resorts.

Confident of tourism’s resilience, she said the significant thing is not only were they able to open a resort the very day the destination opened, but within two weeks opened a second resort – RIU Reggae, and within another two weeks RIU Tropical Bay in Negril, and now Montego Bay and Palace.

The hotel chain says it has recalled most of its staff, which has resulted in bringing some financial relief and emotional support to more than 1,200 families.

“We are very grateful as our staff is the pillar upon which we stand and the reason we are loved by many,” said Garcia-Linton.