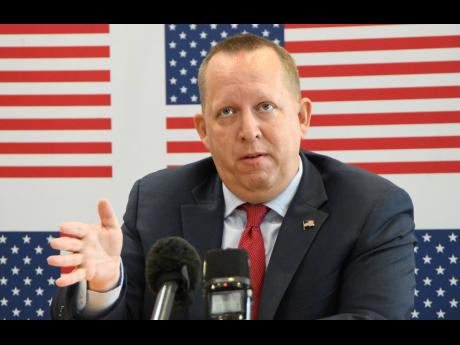 The Chinese Embassy in Kingston says it rejects recent remarks made by United States (US) Deputy Chief of Mission John McIntyre that suggested the Asian economic superpower poses strategic risks through its telecommunications equipment and devices.

Chief of the Political Section, Xia Shaowu, told The Gleaner that the American diplomat used his pulpit to slander Chinese corporations.

“For quite some time, the United States has been abusing its power to bring down Chinese high-tech companies under the pretext of national security, to which China is firmly opposed,” Xia said

He stated that such practice has no factual basis and is “sheer, malicious slander and political manipulation” by the US, in an attempt to maintain its high-tech monopoly.

The Chinese Embassy official says McIntyre’s attitude typifies America’s “typical hegemonic behaviour that runs against market principles and international trade rules, as well as the common interests of the international community,” adding that it will inevitably damage the national interests and image of the US.

We recall that these political tactics of intimidation have occurred frequently in the past by the United States, in order for it to pursue monopoly profit and hegemony in science and technology.

“We applaud Mr McIntyre, who stated the US would not dictate to any sovereign country what decisions should be made. This statement should be upheld for the integrity of foreign countries conducting business on safe and unbiased terms,” said Xia.

READY TO WORK WITH COUNTRIES

He said that China stands ready to continue working with Jamaica and other Caribbean countries to safeguard a fair, just, open and non-discriminatory business environment, to promote international science and technology exchange and cooperation, and ensure that safe, reliable and high-quality information technology will serve as an emerging driving force for global economic recovery and a better life for people around the world.

US security concerns about Chinese technology giant Huawei’s 5G technology remains a thorny geopolitical issue between the two most powerful world economies, even as the Jamaican Government has been mulling the introduction of 5G mobile technology, with emphasis on the Spectrum Management Authority’s recently tabled annual report for 2019-2020, which stated its objectives to prepare Jamaica for 5G services.