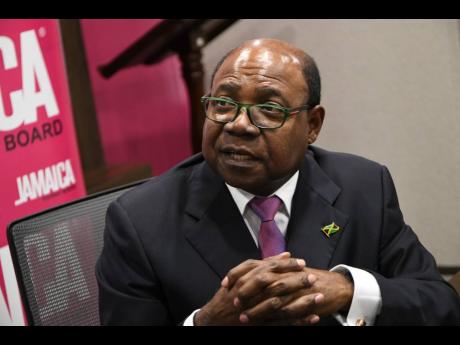 With a steep 75 per cent drop in tourist arrivals for the last three quarters of 2020, the Caribbean is expected to contract by 20-30 per cent this year, says Jamaica’s Tourism Minister Edmund Bartlett.

He has cautioned that it will require some out-of-the-box thinking and a stick-to-it-iveness approach by regional and international policymakers for the Caribbean to fully recover from the COVID-19 pandemic.

Speaking in his new capacity as chairman of the Working Group on Accelerating the Recovery of the Airline and Cruise Industries in the Post-Pandemic Stage of the Organization of American States (OAS) Inter-American Committee on Tourism, Bartlett said tourism-dependent nations in the region have been so hard hit that nothing short of a concerted approach and a firm acknowledgement of the crisis at hand by world powers will give the Caribbean a fair shot at recovery in the quickest time possible.

“The United Nations World Tourism Organization has described the current pandemic as the worst crisis that international tourism has faced since records began in 1950,” Bartlett noted.

“It has been projected that for 2020, between US$910 billion and US$1.2 trillion will be lost in export revenues from tourism and 100 to 120 million direct tourism jobs are at risk as a result of international travel restrictions and reduced global demand.”

“This contraction in tourism is sharply slowing economic activity in the Caribbean, with growth projected to contract by 6.2 per cent in 2020. The recovery of tourism will crucially depend on how and when borders are opened across the world,” he added.

The tourism minister, who also heads the Global Tourism Resilience & Crisis Management Centre (GTRCMC) and is tasked with leading the region’s recovery effort, said the GTRCMC will continue to strengthen collaboration with its network of local, regional and international partners to mitigate the impact of the pandemic on destinations, as well as to identify effective strategies for their recovery and to enhance their preparedness and responsiveness to future shocks.

He added that the GTRCMC recognises that the timely recovery of tourism was crucial to the overall economic stability of the region, noting that the socio-economic fallout from any prolonged disruption to the tourism sector will likely produce dire consequences for the Caribbean.

And citing an International Labour Organization which describes tourism as the major source of revenue and jobs in the Caribbean region, Bartlett noted that, before the pandemic, the tourism sector supported 16 out of 28 economies in the Caribbean, adding that the region is, in fact, the most tourism-dependent in the world with the most vulnerable, led by The British Virgin Islands, with 92.6 per cent dependence.

“The travel and tourism sector contributed nearly US$59 billion to the gross domestic product (GDP) of the Caribbean in 2019. On average, the tourism industry directly contributes up to about 33 per cent of GDP and over 52 per cent of export receipts,” he added.

“In Antigua and Barbuda, tourism accounts for 54 per cent of GDP; 42 per cent in Belize; 41 per cent in Barbados; 38 per cent in Dominica and 34 per cent in Jamaica. The industry provides direct employment to 413,000 workers in the Caribbean, representing, on average, 18.1 per cent of total employment. When we factor indirect and induced employment, this estimate could rise to 43.1 per cent, with a distribution skewed upwards in tourism-dependent Eastern Caribbean countries.”

In terms of direct employment, 48 per cent of persons employed in Antigua and Barbuda work in tourism-related activities; 41 per cent in Barbados, and 31 per cent in Jamaica. Tourism is also aligned with many of the key targets of the Sustainable Development Goals Agenda, the minister further argued.

He added that tourism is a labour-intensive sector that creates jobs for people of all ages and skills levels, not only in the sector, but through its value chain in many other sectors such as cultural industries, agriculture, construction, manufacturing, transportation, handicrafts, health, financial services or information and communication technologies.

“Tourism-dependent economies such as those in the Caribbean are obviously being disproportionately impacted by the socio-economic fallout from the current global crisis. The Caribbean region has limited social safety nets. This means that our people, economy and future are far more likely to be decimated by COVID-19 than nations with more diversified economies.”