No barrel backlog for Christmas – Williams 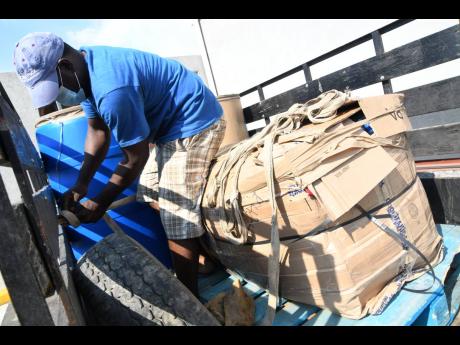 Rudolph Brown
Orville Morris loads his van with a barrel and boxes at the Kingston Wharves in Kingston on Tuesday.

Since the end of last year, the group instituted an appointment system as a crowd-control measure, and this year has brought a simpler fix that allows them to complete the necessary processes before arriving at the port.

“What we have tried to do this year is to move our customers from in-line services to online services,” said Williams, who expressed that it has been difficult to get persons to make use of the switch as “people continue to let it be an outing”.

In utilising the online facility, customers can see their cargo being delivered, pay online and complete pickup in at least 10 minutes. He added that if they can afford it, they should also make use of the door-to-door services that are offered by various agencies, explaining that cargo cannot be tampered with as the warehouse is completely monitored by CCTV cameras.

While mounting her cargo to the vehicle, Andrea Smith of Stony Hill told The Gleaner that the implementation of the appointment system has made the process a lot more bearable.

“For the first time, it wasn’t that long,” she said, noting that the place is usually jam-packed, particularly around Christmas time and back to school.

The decrease in cargo being sent as a result of the effects of the pandemic could also account for the shorter wait periods as customers that travel to the port go through their barrels and boxes. Smith mentioned that this year she is collecting less than half of the cargo she used to. Additionally, shipping companies have been unable to trade as they usually would as they continue to work to retrieve empty containers from various ports.

Reports from the last quarter show that profits have declined by approximately 10 per cent from last year, the KWL CEO said. “Looking into December, the forecast is that we will narrow that even further and we should be coming out comparable to last year’s worst-case scenario,” said Williams.

He added that while the trans-shipment arm for motor unit business to the other Caribbean and Latin American ports has exceeded last year’s numbers, the domestic business for cars is down by 30 to 35 per cent.