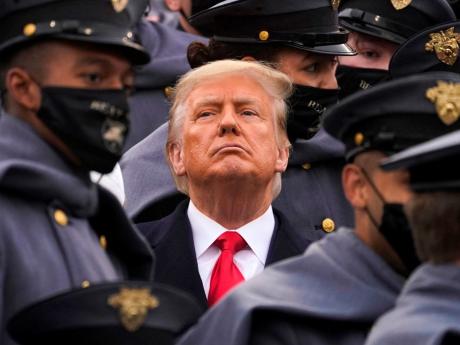 Surrounded by Army cadets, President Donald Trump watches the first half of the 121st Army-Navy Football Game in Michie Stadium at the United States Military Academy on Dec. 12, in West Point (AP Photo).

(AP)- Contradicting his secretary of state and other top officials, President Donald Trump today suggested, without evidence, that China — not Russia — may be behind the cyber-attack against the United States. He also tried to minimise the impact of the attack.

In his first comments on the breach, Trump scoffed at the focus on the Kremlin and downplayed the intrusions, which the nation’s cyber security agency has warned posed a “grave” risk to government and private networks.

“The Cyber Hack is far greater in the Fake News Media than in actuality. I have been fully briefed and everything is well under control,” Trump tweeted. He also claimed the media are “petrified” of “discussing the possibility that it may be China (it may!).”

There is no evidence to suggest that is the case. Secretary of State Mike Pompeo said late Friday that Russia was “pretty clearly” behind the cyber-attack against the United States.

“This was a very significant effort and I think it’s the case that now we can say pretty clearly that it was the Russians that engaged in this activity,” he said in the interview with radio talk show host Mark Levin.

Officials at the White House had been prepared to put out a statement Friday afternoon that accused Russia of being “the main actor” in the hack, but were told at the last minute to stand down, according to one U.S. official familiar with the conversations who spoke on condition of anonymity to discuss private deliberations.

It is not clear whether Pompeo got that message before his interview, but officials are now scrambling to figure out how to square the disparate accounts. The White House did not immediately respond to questions about the statement or the basis of Trump’s claims.

Throughout his presidency, Trump has refused to blame Russia for well-documented hostilities, including its interference in the 2016 election to help him get elected. He blamed his predecessor, Barack Obama, for Russia’s annexation of Crimea; has endorsed allowing Russia to return to the G-7 group of nations; and has never taken the country to task for allegedly putting bounties on US soldiers in Afghanistan.

Pompeo in the interview said the government was still “unpacking” the cyber-attack and some of it would likely remain classified.

“But suffice it to say there was a significant effort to use a piece of third-party software to essentially embed code inside of US government systems and it now appears systems of private companies and companies and governments across the world as well,” he said.

Though Pompeo was the first Trump administration official to publicly blame Russia for the attacks, cyber security experts and other US. officials have been clear over the past week that the operation appears to be the work of Russia. There has been no credible suggestion that any other country — including China — is responsible.

Democrats in congress, who have received classified briefings have also affirmed publicly that Russia, which in 2014 hacked the State Department and interfered through hacking in the 2016 presidential election, was behind it.

It’s not clear exactly what the hackers were seeking, but experts say it could include nuclear secrets, blueprints for advanced weaponry, COVID-19 vaccine-related research and information for dossiers on government and industry leaders.

Russia has said it had “nothing to do” with the hacking.