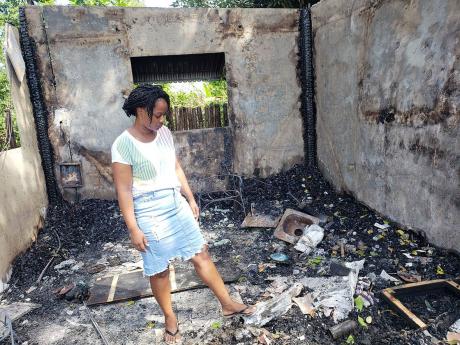 Photo by Shanna Monteith
Takay Reid stands amid the charred rubble of what was once a thriving business in Dumfries. Reid said that St Thomas firefighters were unable to save her burning business on December 19 because its trucks were out of service. 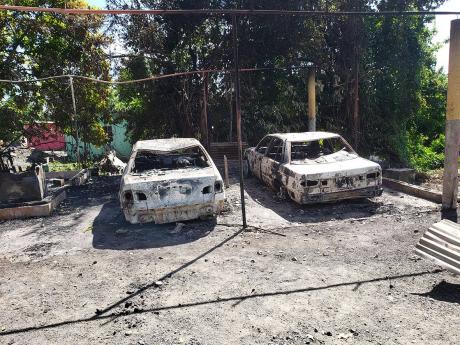 A weekend fire stole Christmas joy for Takay Reid of Dumfries in St Thomas, depriving the business owner of her livelihood.

In addition to her salon and equipment being torched, the professional nail technician lost an adjoining space she rented as a cook shop.

Two vehicles, one belonging to Reid’s husband, were also destroyed by Saturday’s fire.

Reid told The Gleaner that she had just left the shop to go home and rest for a few hours when she was alerted to the devastation.

“I had worked all day and all night on Friday into Saturday until after 1 o’clock in the afternoon,” she said.

But the siesta that should have offered her comfort was rattled when she heard cries of “Fire!” When Reid struggled to her feet and rushed out, it was too late, as she watched the business she had toiled over for the last six years go up in flames.

Describing the disaster as a huge setback, Reid revealed that she had been booked for most of the holidays. She was remorseful on Monday as she pondered her next move.

“I don’t have a second income. This is what puts food on my table for my children,” Reid said.

The fire department’s estimate of $2.5 million in losses only captures the devastation to the building and vehicles. But there’s much more that was lost.

Razed products and furniture cost about $500,000, she said, ruing that she had spent money licensing and insuring the vehicle the day before the fire.

Standing in the charred rubble that once provided her livelihood, a tearful Reid lifted her hands in praise to God, appearing to draw divine strength and consolation.

Reid disclosed that her clients have also been supportive, crediting Brady’s Better Choice in downtown Kingston for directing a few of its clients her way to tide her over.

The salon operator expressed disappointment in the St Thomas Fire Department, which, she said, could not help because its trucks were under repair.

Assistance was later sought from a unit in Portland.

“How can you have a station with no truck up and running? Fire don’t set like rain,” she fumed.

“You don’t get time to prepare for it, so you should always be ready.”

She praised the effort of firefighters from Port Antonio though they were too late.

“Even though when they got here, everything was gone, the time they took to get here from all the way in Portland, if they were in Morant Bay, my business would have been saved,” she said.

St Thomas fire chief, Deputy Superintendent Horace Thomas, confirmed that when the station was contacted, both units serving the parish were down because of mechanical problems.

One of the trucks has since been repaired, said Thomas, while the other is expecting to be fixed later this week.

Thomas told The Gleaner that the Jamaica Fire Brigade was expecting the delivery of new units by March next year.

The deputy superintendent renewed calls for the establishment of two additional fire stations in the parish.