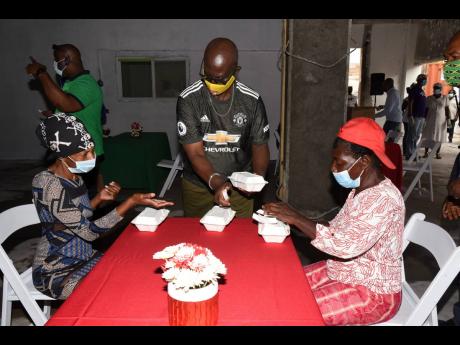 Local Government Minister Desmond McKenzie has praised mayor of Kingston and St Andrew, Delroy Williams, for addressing the needs of the homeless and indigent following the launch of a soup kitchen.

According to McKenzie, Jamaicans should focus on positivity, as he pointed out that Kingston and St Andrew Municipal Corporation (KSAMC) has made a sincere commitment to address the plight of persons living on the streets, by creating a temporary shelter at the same location of the soup kitchen, on Church Street, a short distance from the KSAMC.

“There are times when we read the papers and listen to the news, and all that can be said about elected representatives is a lot of negative. A lot of what we have been done, comes at a time when a lot of people who are critical of us are not stretching out their hands to do anything, but are always the first to criticise.

“I want to commend the mayor, his team and minority leader, councillor Andrew Swaby because the approach to the problems of the city, although councillor Swaby is wearing his orange shirt, is not orange or green. Hunger and homelessness know no political bounds. GraceKennedy has decided to come on board to provide the necessaries to help out in the kitchen. I want to invite other corporate bodies to join us,” he said, noting that Digicel, as part of its corporate responsibility, last week donated, “high-end telephones that will allow some of the 1,500 residents or more in infirmaries to make contact with family and friends over the Christmas.

“This is for those in need. When a pound of rice is given to be cooked, we are expecting that a pound of rice will be cooked and given to the people who need it most. Mayor, that is my warning! There should be no abuse of the privilege here. This is a good day for the city of Kingston. This is a wonderful crowning achievement for the KSAMC.”

The local government minister shared that more than 2,000 Jamaicans live on the streets, with the majority in Kingston and St Andrew, specifically in downtown Kingston. Therefore, McKenzie noted that the launch of the soup kitchen will bring relief to the less fortunate and homeless.

“The numbers have grown over the past couple of months. We have been feeding close to 700 or more persons on a daily basis, two meals a day, plus a care package. The Government has provided the funds to ensure that we are able to continue the programme going into the end of this financial year. We are committed to continue the programme. This facility, the shelter, renovation and building the kitchen, putting the the equipment, we provided over $14 million to the KSAMC, and I want to make the point that they have used the funds that were provided by the ministry and they have not asked for a cent over the budget they had submitted to the ministry for the construction and operation of the facility. Mayor, I want to thank you for the management”.

Williams, who was brief with his comments, singled out as something to be proud of, that the soup kitchen would distribute meals across the municipality, as well as supply other distribution locations.

“The municipality is very pleased to be a partner in this project to focus on providing meals to the homeless. It is also a temporary shelter and I just want to take this opportunity to commend the ministry and to say how pleased we are to the minister of local government for the leadership he has shown on this issue and for the guidance he has provided.”

Since COVID-19 protocols were imposed in March, a significant number of persons have been living in the streets. The Marie Atkins shelter on Hanover Street has been accommodating the homeless, however, many of them prefer the streets.

The Church Street-based shelter where the soup kitchen is located, provides refuge for more than 100 persons, many of them with mental illness.