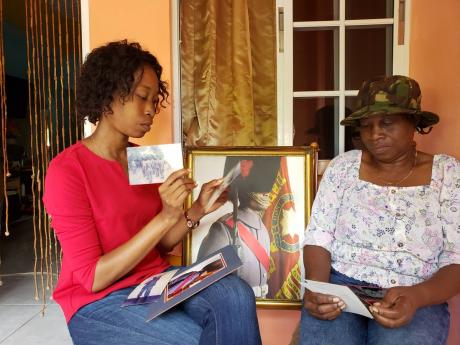 Contributed
Kirtland Gill’s mother, Castrolyn Scott (right), and his sister, Anneisha Gill, look at old photos of Kirtland when he was a cadet in high school. 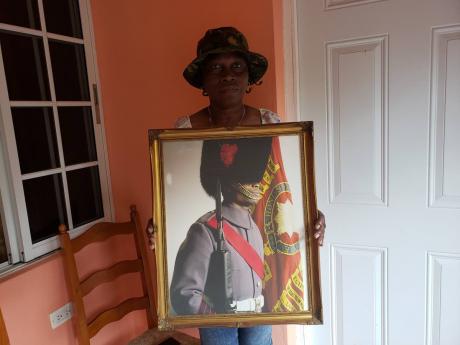 Contributed
Kirtland Gill’s mother, Castrolyn Scott, proudly displays a photo of her son who was chosen to head the oldest regiment in the British Army.
1
2

The Queen of England is in good hands, according to the family of Kirtland Gill, who was recently chosen as the first black soldier to head the oldest regiment in the British Army.

Promoted to Regimental Sergeant Major, one of the most senior army roles, 40-year-old Gill is set to lead the Queen’s elite Coldstream Guards come next year.

Though obviously proud of her son’s achievement, Castrolyn Scott was a sight of humility and introversion when The Gleaner visited their family home in Hampton Court, St Thomas.

The pleasant woman described Gill as a humble and obedient person who, as a child, was no trouble at all.

Scott, who, along with her partner Michael, a fisherman, parents two other children - Ryan, who once served alongside his older brother in the British army, and their eldest, a daughter, Anneisha.

Sharing that her father had left for sea earlier that morning, the proud big sister, who now teaches at a high school in the parish, gladly steered the conversation about their growing up years and character of her brother, who is one year her junior.

“Kirt was always very hardworking. He was a very meticulous boy who was keen to complete all his given tasks. He was precise, organised and careful and though he would do whatever he was told, he always had a lot of questions as he tried to find out why he should do it and what result will it have. He was very detailed.

According to the family, it was always Gill’s dream to be a soldier, and started his military training in high school where he was enrolled as a Cadet.

“He would train everyday and also include his smaller brother. He never missed camps or rehearsals and he was always so neat! His shoes would be so shine that you could see your face in it,” Anneisha laughed as she added that her brother was also an excellent student with high grades in all his subjects.

She revealed that the now sergeant major of the British army, wanted to enrol into the Jamaica Defence Force, but was too young at the time.

“That’s why he started doing other things in the meantime including fishing with our father and, of course, he was good at that too. He took charge of everything. Even though he was young, he would even take the boat out to sea by himself and without using a compass.

MASTER OF ALL TRADES

I’m truly really inspired by his achievement and we know that he is capable. He is master of all trades so we know he will fulfil his duty. The queen is definitely in the right hands,” she said.

Community members were also among those sharing fond memories and hearty congratulations for the new chief guardian of the Queen.

According to the Gills’ neighbour, Karleen Henry, “It’s good knowing that he reached to that position. I don’t really support persons fighting wars but seeing he chose that as his career, I really feel good for him and knowing he’s a little community youth who used to play and go to school with my kids, it’s good to see him doing well and not on the road giving trouble.”

Donavan Vincent recalled his days fishing with a teenaged Gill, “He was always a good youth. Him brains quick. Mi teach him how to cut line and net and him drive engine boat and suh forth and him learn quick. I loved working with him because him have good manners and behaviour. Him will reach far.”