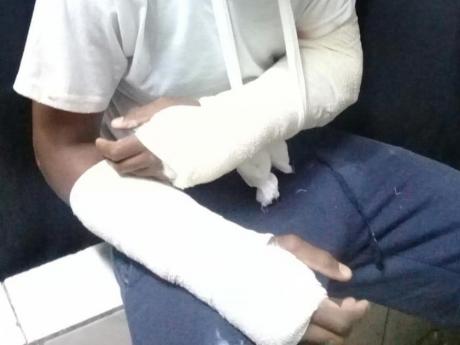 This leaked photograph shows an inmate of the St Catherine Adult Correctional Centre with both arms in bandage after they were reportedly fractured during an altercation with warders.

The Independent Commission of Investigations (INDECOM) has concluded that inmates at the St Catherine Adult Correctional Centre in Spanish Town were on a hunger strike.

At the same time, the commission is now probing allegations that prisoners have been physically abused by warders.

Some prisoners have alleged that during a series of security operations and searches, they were mistreated by warders, with at least three inmates now receiving medical treatment as a result of blows to their bodies.

A photograph obtained by The Gleaner shows one inmate with both arms bandaged.

They were reportedly fractured during an alleged altercation with two warders as the inmate sought to block the warders' attempts to beat him with a baton.

In a voice note purportedly from an inmate, one prisoner also said warders had been breaching their own policies entering the living quarters of inmates with guns.

Matthew Samuda, the minister with responsibility for the Department or Correctional Services, had denied claims that there was a hunger strike at the facility.

He also invited INDECOM and the Office of the Public Defender to visit the facility.

The minister could not be immediately reached for a reaction to INDECOM’s finding. In the meantime,  officers from the Office of the Public Defender are preparing to visit the prison.

Human rights lobby group Stand Up for Jamaica has also launched a probe into the claims by the prisoners.

Convenor Carla Gullota told The Gleaner that a team of attorneys representing her group have already collected several statements from inmates who have alleged the warders have been abusive.

She also insisted that although some inmates have ended their hunger strike after being addressed by prison authorities, others have continued.