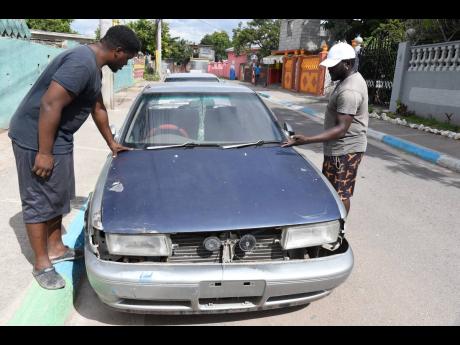 Ian Allen
Andre Bryson (left) and Steve Maragh, friends of Robert Martin who was shot and killed by gunmen on Port Henderson Road in Portmore last Sunday, look at the car he was working hard to fix for the new year. 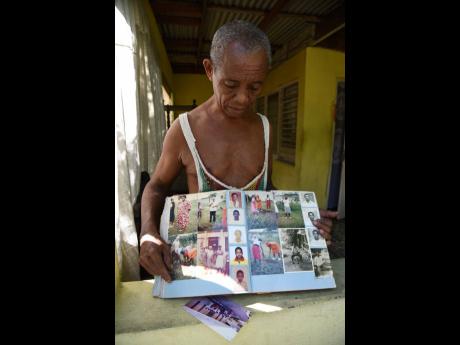 Thirty-three-year-old Robert Martin had one major wish for the new year, and that was to finish working on his motor car that has been parked outside his home gathering dust for several months.

So committed was he to the goal that late last year, Martin took on a second security guard stint at a plaza on Port Henderson Road in Portmore, St Catherine, as an added income.

But his dream was not to be.

Martin was shot in the back of the head as he made his way home from work around 7 p.m. last Sunday.

His attackers took his life, his cellular phone and a laptop before leaving his corpse face down not far from the entrance of the Port Henderson beach.

Fruit vendor Marie Sterling* is happy to make it into 2021. Days before Christmas she almost suffered a similar fate as Martin.

This time in broad daylight, the darkness of the gun barrel jammed at her face, eclipsing the sun in downtown Kingston.

The criminals peeled her apron from her body with roughly $40,000 inside, and replaced it with despair and a traumatic experience that will plague her for many Christmases.

The stories are aplenty – of bike riders plaguing Half-Way Tree and New Kingston; women being abducted and robbed; and of even pizza delivery men jammed by hungry bandits.

The Jamaica Urban Transit Company was also not spared in the robbery rush late last year. Two of the company’s drivers were abducted, robbed and later released.

It is a crisis experts, early last year, warned about as COVID-19 fuels job losses, poverty, desperation, and threatens a recession.

Last week, Senior Superintendent Stephanie Lindsay explained that motorcycles were the vehicles of choice for robbers. Handguns were their favoured weapons, and COVID-19 masks their preferred disguises.

“We saw where they have used the COVID-19 restrictions, especially the wearing of masks, to their advantage, which is a double-edged sword where the very thing that is intended to keep us safe, criminals have used this to exploit,” said the head of the Jamaica Constabulary Force’s Corporate Communications Unit.

“We knew that motorcycles were the main vehicles of choice and so the Public Safety and Traffic team and others focused on that,” said Lindsay, citing a heavy deployment of cops and intelligence operations over the Christmas season.

“Some persons known to be part of these crimes were sought after. The criminals organise themselves and so we have been very deliberate in our operation and we have seen the results,” noted the senior cop, adding that more than 60 guns were seized in December, the highest of any other month.

On paper, police records paint a less grim picture than the views of ordinary Jamaicans on the streets. Up to Boxing Day, sleuths reported a 15 per cent reduction in robberies to 982 from January 1. Some cases, like Sterling’s, go unreported to the police, as she is fearful of losing her life.

Meanwhile, police say break-ins featured most prominently in St Elizabeth, Manchester and Clarendon last year, but there was an overall reduction from 1,233 in 2019 to 1,000 last year.

Some 1,301 Jamaicans were also killed up to Boxing Day, in spite of COVID-19 restrictions limiting movement and encouraging staying home.

For their families, like Martin’s elderly uncle, Bill, 2020 has been life-changing.

“The grey car outside is for him but it needs some fix up. So he was looking money because he said that he wanted the new year to come catch him with him wheels,” recalled Bill, who had been living with Martin since his mother and grandmother died years ago.

“The police just come Monday and show me the picture and ask me if I know him and that him dead. That’s the last I hear,” he said, bemoaning the ruthlessness of the killers.

“They are just evil. Is money they (robbers) running down in front of life. The yute is just 33 and them kill him. Him don’t live no life yet. None,” he stressed, noting that his nephew struggled after losing his mother and grandmother.

Last week, the police in Portmore said they had arrested suspected thieves in the general location of Martin’s killing, and that they were investigating the murder.