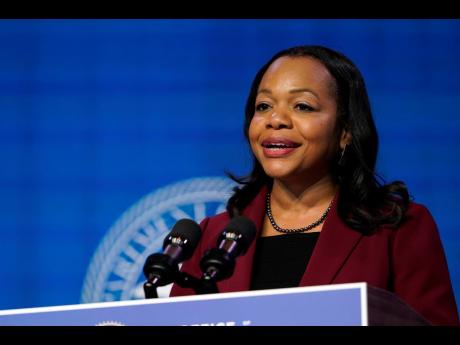 Kristen Clarke, assistant attorney general for the civil rights division in the Department of Justice.

Another person with Jamaican roots has joined the Biden-Harris Administration in a high-ranking position.

This time it is Kristen Clarke, a civil rights attorney, who has been selected by United States President-elect Joe Biden as associate attorney general in the Department of Justice to head the department’s civil right division.

Clarke joins Vice President-elect Kamala Harris and Susan Rice as people with Jamaican roots in the new US administration.

Clarke’s parents immigrated to Brooklyn from Jamaica. She has said that she “grew up in a household that was about discipline, working hard in school, and about making the most of every opportunity”.

Speaking about her appointment, Clarke said she was honoured to serve in the Justice Department.

“This job is about equality under the law. Under our DOJ, we will move closer to the true meaning of equal justice under the law,” she said.

“We are thrilled at Kristen Clarke’s appointment as assistant attorney general for civil rights in the Justice Department. This appointment comes at a crucial juncture in America’s history to address the systemic inequities and structural racism that remain prevalent in our society. We congratulate Attorney Kristen Clarke and expect her to perform brilliantly in her role to ensure the twin pillars of equality and justice for all! The Jamaican community beams with pride at her Jamaican roots. We are indeed a ‘likkle but tallawah’ people,” said Dr Dunkley, applauding the Biden-Harris team for their commitment to diversity and inclusion in the incoming White House administration.

“For many years, our music, culture, and food have been of international prominence. Now, we should include our management and leadership capabilities. Congratulations to Kristen Clarke, who is of Jamaican parentage, on her appointment by President-elect Joe Biden. We here in the Southeast Diaspora recognise her hard work and dedication to the discipline and are extremely proud of this appointment,” he said.

According to Jamaican attorney Wayne Golding Junior: “This appointment is yet another example of how the Jamaican Diaspora has truly assimilated seamlessly in the wider communities that they find themselves. They, oftentimes, work silently to effect positive change,and it is a wonderful and proud moment when their hard work and dedication is rewarded with influential appointments such as this.”

Golding said the community stands proudly with her as she joins the throng of positive influential history making Jamaicans in the Diaspora.

Clarke is president of the Lawyers’ Committee for Civil Rights Under Law. She previously headed the civil rights bureau of the New York Department of Law under Eric Schneiderman.

In 2019, Clarke represented Taylor Dumpson, the first Jamaican-American woman student body president of American University, in her lawsuit against white supremacists. The day after Dumpson was inaugurated as president, neo-Nazi Andrew Anglin coordinated a series of hate crimes on campus, including hanging nooses with bananas tied to them. He then directed his followers to harass her on social media, a so-called “troll storm”. Clarke successfully fought for the United States District Court for the District of Columbia to recognise that hateful online trolling can interfere with access to public accommodation as well as securing damages and a restraining order.

Clarke was a member of Prep for Prep, a non-profit organisation that helped students of colour to access private-school education. She attended Choate Rosemary Hall, where she was the only girl to join the boys’ wrestling squad.

She earned her bachelor’s degree at Harvard University, where she was involved with initiatives to support and champion African-American students, and graduated in 1997.

She moved to Columbia University for her graduate studies, where she completed a Juris Doctor in 2000.

After graduating, she worked as a trial attorney in the US Department of Justice Civil Rights Division. In this capacity, she served as a federal prosecutor and worked on voting rights, hate crimes, and human trafficking cases.

Clarke spent several years at the NAACP Legal Defense and Educational Fund, Inc (LDF), where she helped lead the organisation’s work in the areas of voting rights and election law across the country. She worked on cases defending the constitutionality of the Voting Rights Act and also testified before Congress and state legislatures.

Her honors and awards include the 2018 Louis L. Redding Lifetime Achievement Award; the 2018 Harvard College Service to Society Award; the 2017 Choate Rosemary Hall Alumni of the Year; the 2017 Thurgood Marshall Award from Quinnipiac University School of Law; the 2016 Alumni of the Year by the National Black Law Students Association; the New York Law Journal’s 2015 Rising Stars; the 2014 New York State Senate Proclamation for Exemplary Service; the 2012 Best Brief Award for the 2012 Supreme Court term from the National Association of Attorneys General; the 2012 Network Journal’s Top 40 Under 40; the 2011 National Bar Association’s Top 40 Under 40; and the 2010 Paul Robeson Distinguished Alumni Award from Columbia Law School, among others.