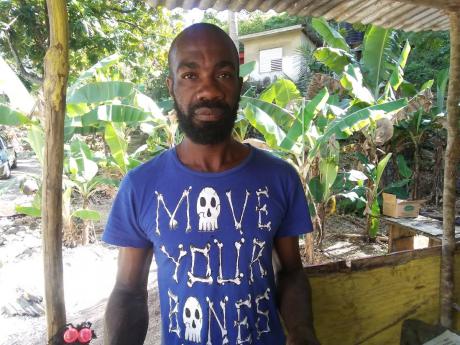 Hopeton Bucknor
Sheldon Muir, the grieving father of Gabriella Madden who drowned in the Black River on January 2.

Sheldon Muir, the grieving father of one of the teenage girls who drowned in a section of the Black River on January 2, is blaming the girls’ death on the negligence of Member of Parliament (MP) J.C. Hutchinson.

Muir told The Gleaner that the girls, who were swept away by strong current, died because of the lack of water in their community, which forced them to have to get it from the dangerous Black River. This, he said, is due to poor representation by their MP.

“Wi have a community tank, but it empty and waa clean. We use to get water in about early 2000. Sometime wi get water today, an don’t get it again until weekend, yu understand, and wi did a get estimated bills. The people dem did fed up an naw pay the water bill, because dem naw get the water as how di bill a come.

He said since the death of the two girls, neither his nor the other grieving family has heard from or seen their member of parliament.

When contacted, Member of Parliament J.C. Hutchinson said he has heard the allegations, stated that getting water to the community of Coker district was not his job, but those of the National Water Commission (NWC), and that Councillor Powell and himself have been making representation to get water in the area.

“We have been making representation to the NWC for a number of years now to run a pipe from the Revere area up to Coker, where they have a tank, and that tank would gravity-feed the water straight round the whole district, and also carry it back down to Newton,” Hutchinson said.

“I understand that the NWC wants to make some elaborate system, where they want to move the water pipes from Maggoty over to Newton, and join it on to their system, which is over three miles.

“The problem is that we have been pressing the NWC over the years and they have not been moving at all. We do truck water to the area on a regular basis when we have money, so if anybody is to be blamed for the entire incident is the NWC, not me,” Hutchinson said.

“Although dem blaming me, I am not the one who is able to put in the water right now, or get the thing going, NWC is the one who has to get it going.”

Reports are that both girls, 13-year-old Gabriella Madden and 15-year-old Shelecia Litchman, left their home in the company of other children and went to the river. The girls were in the process of crossing the river, but due to strong current, they got into difficulties and were swept away.

The police were summoned and a searched party was organised by community members, with the help of the Jamaica Defence Force Coast Guard. The girls’ bodies were found a day later.