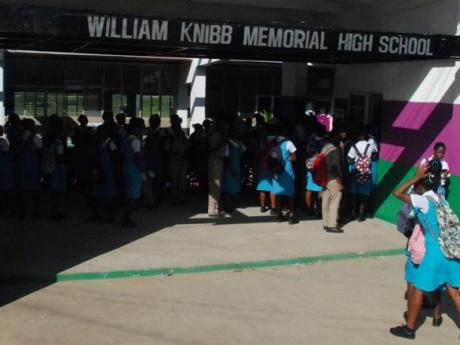 In its ruling, the Teachers' Appeal Tribunal chaired by retired Court of Appeal judge, Mahadev Dukharan, accepted the teacher's claim that the termination was excessive.

The William Knibb High School teacher who was dismissed after pulling his licensed firearm during a confrontation with a student has won his appeal against the termination.

In July 2017, the board of the Trelawny-based school fired Ali Abdalla following a hearing a month earlier.

The board concluded that the teacher’s temperament was "not healthy" for the school environment and that he was a dangerous and a serious threat to the safety and security of staff and students.

Abdalla appealed to the Teachers’ Appeal Tribunal which heard the matter on August 24, 2020 and ruled in his favour on December 3.

The Gleaner has obtained a copy of the ruling.

It alleges that on March 24, 2017, the teacher got into an altercation with a student, who disobeyed his instruction to end his loitering and go to class.

The teacher reportedly pushed the student twice then collared the child.

Soon after, the student picked up stones ran at the teacher at which time Abdalla withdrew his weapon.

The student then scaled the school’s perimeter wall and fled.

The teacher reportedly tried to drive off campus but found the gates locked after which he took out a machete and headed toward the teachers’ cottage.

He reportedly swung the machete at security personnel who tried to stop him.

In its ruling, the tribunal chaired by retired Court of Appeal judge, Mahadev Dukharan, accepted Abdalla’s claim that the termination was excessive.

It also ruled that there was a conflict of interest involving the vice-principal Lorna Jackson.

Jackson, who had initiated the disciplinary proceedings by writing to the board about the incident, had also participated in deliberations by a subcommittee of the board to determine whether the matter should be pursued.

The tribunal also accepted that the school safety and security policy the board used to assess the case was not in effect at the time of the incident.

Evidence, the tribunal also said, was not provided to prove beyond a reasonable doubt that the teacher intended to harm the student or staff because the use of the machete is open to several interpretations including for protection.

The teacher was represented at the hearing by Dr Mark Nicely of the Jamaica Teachers’ Association.