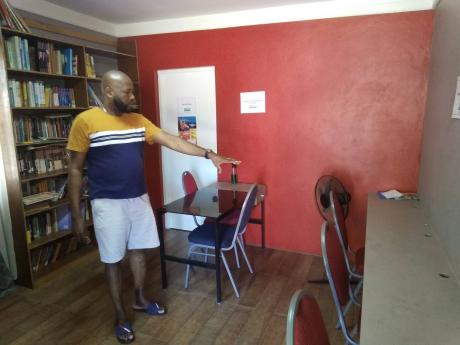 Photo by Hopeton Bucknor
Antonio McKoy, the chief executive officer and founder of the Le Antonio’s Foundation, showing off the state-of-the-art homework centre, which he had completed earlier this year at the tune of over a million dollar.

More than 60 students from inner-city communities in Montego Bay, St James, are now facing an uncertain educational future as the Le Antonio’s Foundation and Resources Centre, located at Railway Lane, Montego Bay, was forced to close its doors permanently because the building that they occupied is no longer available.

The facility, which has been in existence since 2014, has been providing a safe haven for inner-city students, who were offered a fully equipped homework centre, computer centre, library, Internet lounge, a counselling room, and a dining area.

A dejected Antonio McKoy, the chief executive officer (CEO) of the Le Antonio’s Foundation and Resource Centre, told The Gleaner that it is with a very heavy heart that the decision to close the foundation was taken. According to him, the owner of the premises, which housed the foundation, wrote to him outlining a new rental agreement, asking for a monthly sum of $80,000, which is $55,000 more than the previous rental agreement of $25,000.

“Because of the whole COVID-19 pandemic, the foundation had taken on extra children since September, and the staff and voluntary workers at the centre have been asked to contribute a little more dedication and time, to the programme,” said McKoy. “My joy is to help and serve children, but I have now hit a stone wall when I am being asked to pay an increase of over 500 per cent.”

“We are a charitable organisation, and we were already struggling with the expenses to care for the large amount of students who enrolled at the centre, but we kept on going,” added McKoy.

The foundation just recently hosted its Summer Art Programme, where the students who participated were present with cash prizes, scholarships, and gift certificates, which were sponsored by the Hanover Charities, and Councillor Richard Vernon, of the St James Municipal Corporation.

“At this point, there is no way possible we can afford, $80,000 each month, and the landlord known this, so I think this is just a ploy to get us out of the building,” said McKoy. “There are dozens of children in Montego Bay whose parents are not able to provide their children with a proper education, a full course meal each day, and the equipment for online learning. We at Le Antonio Foundation have dedicated our lives to reach out to these children, and we have now come to a dead end.”

McKoy told The Gleaner that the location used to be an old board dwelling house, until he saw the potential for the building, and approached the owner for the use of the premises. He said he went in a written agreement with the owner to spend his own cash, and cash from sponsors, in carrying out repairs to the building.

“Over the past two years, I spent close to one million dollars transforming the building in a state-of-the-art centre to assist needy children,” said McKoy. “I am now left to ponder my next move because I don’t want to leave the children out in the cold.”

“I don’t have any immediate back-up plans. I would like to assist the children, but I am now forced to move out all the furniture. I have sent some to my four staff members and hand over the keys to the landlord,” said McKoy.

Angella Dixon, a parent of one of the students, who resides on Kings Street in Montego Bay, said she was shocked when she dropped off her two children at the centre on Monday only to be told the centre is no longer in operation.