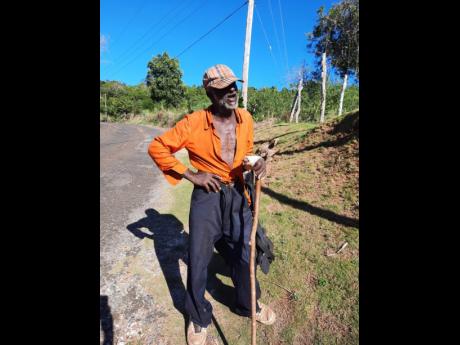 Photo by Erica Virtue
Eustace Wilson, a blind senior citizen in Manchester, does not believe COVID-19 should be a major concern.

Despite news that the mid-island parish of Manchester has experienced a surge in COVID-19 cases in the last three months, many residents of the parish believe reports of the spread and ill-effects of the illness have been exaggerated and have been ignoring some recommendations to curb its transmission.

“We don’t know anybody who have it” is one of the most common responses on their lips, with many doubting the figures, saying that if it were “that bad”, they would know someone infected with the virus.

Until then, mask-wearing will remain at a minimum, they say, in communities and even in the parish capital, Mandeville.

Not all those infected, however, display symptoms.

Recent data shows Manchester with an infection rate of 43 per 100,000 residents, the highest in the island, Health Minister Dr Christopher Tufton revealed last Tuesday. Up to Friday, the parish had recorded 683 of the island’s 14,096 cases and at least 18 of the 323 deaths islandwide since last March.

The information was not of much interest to 65-year-old Eric Allen, although his age puts him among those considered most at risk for adverse outcome should he contract the virus.

“Mi nah wear no mask in a di area. Fi wah? No sah. But once mi go into a vehicle me a wear it. After all, me nuh know if the driver or any passenger have it,” Allen said yesterday, adding that he did not allow any interaction in close proximity with persons outside his household.

Taxi drivers based in Mandeville servicing roughly 20 routes to various communities in Manchester are among the most flagrant abusers of the mask-wearing directive issued last year by the Government for public transportation and public spaces.

The protocol was widely observed for entry to buildings in the Manchester capital, all offering sanitising facilities.

Among those sceptical of reports about the seriousness of the virus, which has killed more than two million people globally, are trained professionals, the elderly, labourers and some taxi drivers.

A retired teacher said he did not believe it was “that serious”.

One taxi driver told The Sunday Gleaner that he wore a mask to protect himself from the passengers and required passengers to wear masks to enter his car.

Eustace Wilson will be 80 years old in October and has been fully blind for about 40 years. All his life he has been helped by the state with a monetary allowance in a programme once known as the Pauper’s Roll, now part of the PATH programme.

He is in the very vulnerable age cohort for infection.

“Yes, man. I hear ‘bout the bad disease, but I don’t know much ‘bout it, you know. I don’t know anyone wid it, yuh know,” he told The Sunday Gleaner.

Lamenting the uncountable times he has injured his toes during his sojourns either to Cross Keys or to visit family nearby, the elderly man everyone calls by his first name wore a cast on his left arm, evidence of a fall some time ago and a reminder of his disability and vulnerability.

NO CAUSE FOR CONCERN

However, like many others, he does not think COVID-19 is a cause for concern.

“I don’t think that disease coming anywhere near me at all. Is nuff things come see me and gone leave me,” he stated, training his face to the direction of the reporter’s voice.

He recalled that the chikungunya and Zika viruses caused much dread a few years ago, and although he was informed that there are major differences between those mosquito-borne viruses and the current coronavirus, he offered an unconvinced chuckle.

Tufton has told St Ann residents that if the current trend continues, more stringent virus-containment measures could be implemented by the Cabinet to reduce transmission rates.

The minister also said that at this point, he could not speak to any complimentary doses of vaccines to Jamaica prior to the inoculation programme which is set to being about April, when the first vials under the COVAX facility are expected to arrive.

“We are trying to secure for the population,” said Tufton.

Barbados Prime Minister Mia Mottley has received the first dose of two from five complimentary doses secured by the administration. Mottley, herself, promising to lead from in front, said she would take the vaccination to boost the confidence of Barbadians about its safety.